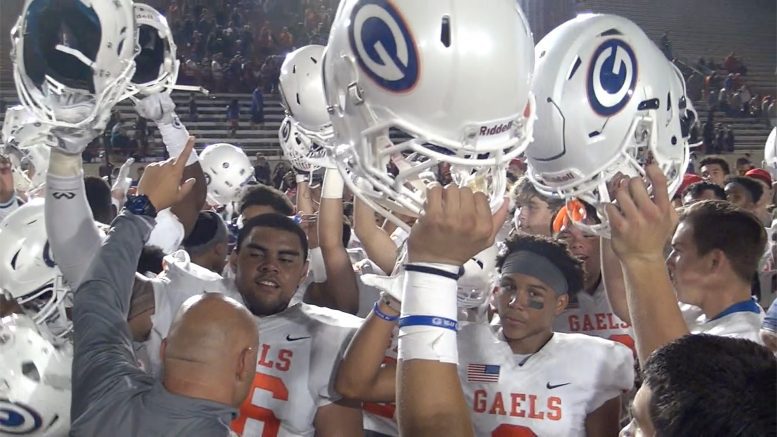 After falling behind Bosco 14-0 in the first quarter, Martell rallied the #2 Gaels with three touchdown passes, plus a rushing touchdown, in a 35-20 win against the Braves before over 12,000 fans at Long Beach Veterans Memorial Stadium.

Not only did Bishop Gorman overcome the two-touchdown deficit, it also overcame a bunch of first-half penalties that kept the Gaels’ offense bottled up at times, head coach Kenny Sanchez said.

“I was really upset with all of the penalties we had,” said Sanchez, whose team trailed 20-14 at the break. “I wasn’t too concerned about how we were playing, but we had to be more disciplined.”

For the game, Gorman was penalized ten times for 73 yards in the first half.

Martell and the Bishop Gorman offense came-out fired-up to start the second half. The Gaels put together a 15 play, 88 yard drive that was capped by a short touchdown run by sophomore running back Amod Cianelli, who stepped-in after Biaggio Ali Walsh went down with an ankle injury in the first quarter.

A key play in that 88-yard drive was a 4th-and-inches at the Gorman 22 yard line.  Sanchez decided to go for it and a sneak by Martell kept the drive moving.

Cianelli’s TD run gave the Gaels the lead for good at 21-20 midway through the third quarter.

“It’s always nerve-wracking,” said Cianelli, who finished with 129 yards on 25 carries. “I just tried to get in there and do my best.”

“Amod (Cianelli) is a big time running back,” said Martell. “He’s just sitting behind somebody (Walsh) that’s obviously a really good running back.”

There’s no word on the extent of Walsh’s injury. He was originally hurt in the opener against Cedar Hill (Texas) and did not play in last week’s win over Cocoa (Florida) last week.

Martell hurt the Bosco with his arm and his feet. He was 6-of-11 in the passing department for 174 yards and his three touchdowns. Two of the TD’s went to Dorian Thompson-Robinson, the other went to Brevin Jordan. Tate Martell and offense look-on after battling back from 14-0 deficit.

Martell also rushed for 183 yards on 16 carries, scoring on a 23 yard touchdown scamper to ice the game with 6:10 to go.

The Gaels have now beaten teams from the big three states of California, Florida and Texas. Next week they take on Hawaii’s top team Kahuku.