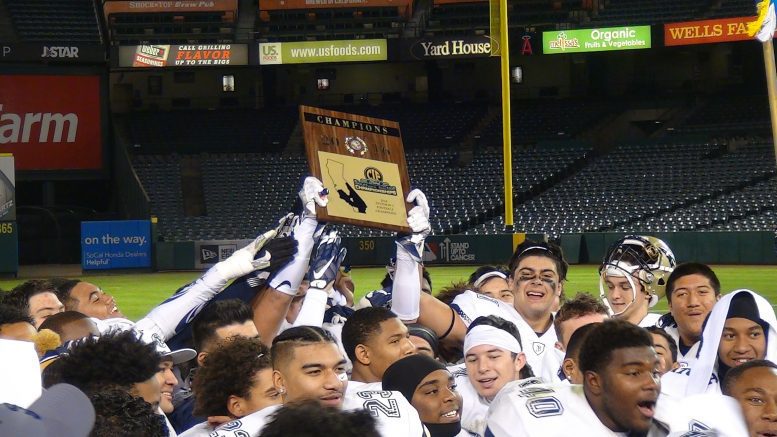 In 2013, St. John Bosco beat De La Salle 20-14, giving the school its first state football championship.  The win snapped De La Salle’s run of four straight Open Division titles, which gives the Spartans plenty of energy going into Saturday’s night’s title game.  It should be noted that while many consider Bosco to be the favorite going into this one, it’s DLS, which has won two straight Open Division titles since that loss to the Braves in 2013.

Many say that De La Salle isn’t the same powerhouse its been past, because of heavy graduation losses from last year’s championship team.  The Spartans bring a 11-1 record into the contest, which includes a last second loss to Utah 4A champ East at home and two one-point victories in the first half of the season.  However, DLS has found its stride over the last six games, outscoring opponents 257-33 in winning its 25th straight North Coast sectional title.

The Spartans offense is still run-first with only 74 passes attempted in twelve games.  The ground game has been led by junior running back Kairee Robinson with 1,833 and 23 touchdowns.

Bosco, which has played one of the toughest schedules in the nation, has taken its game to another level after losing to then #3 Mater Dei 26-21 on October 21st.  Two weeks ago, the Braves avenged that defeat by beating the Monarchs 42-28 for the CIF Southern Section Division 1 title.

SJB’s running game was the key to its win over Mater Dei, as Mitchell, Terrence Beasley and Demetrious Flowers all rushed for more than 100 yards.  Beasley (1,281 yards, 10 TDs) and Flowers (863 yards, 17 TDs) are averaging 7.8 yards per carry each behind Bosco’s mammoth offensive line led by Ohio State-bound Wyatt Davis.