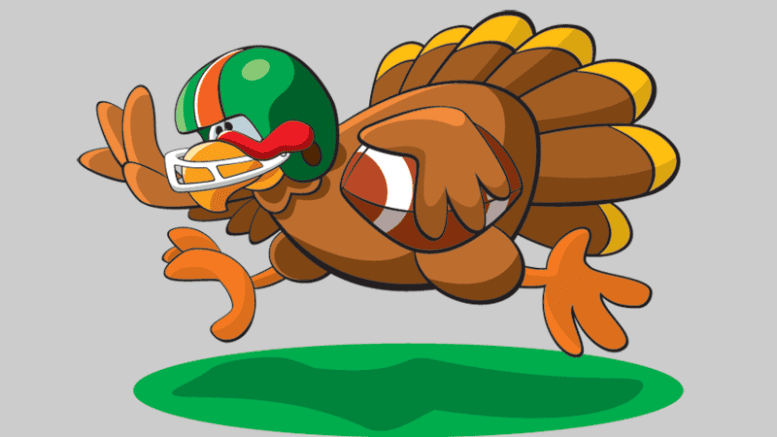 Anything can happen on Turkey Day when long-time rival throw-out the records and battle for community pride.

While we’d love to showcase every high school football game that is played on Thanksgiving, we thought we’d highlight a few here in this story. you can find all of the scores by clicking here to see our state-by-state scoreboards.  There are 10 different states that play Turkey Day games.

Let’s start in my hometown of Easton, Pennsylvania where Easton handed its arch-rival Phillipsburg (New Jersey) its first loss of the season in the 111th game between the two schools that are only separated by the Delaware River.  Easton, which entered the game 7-5, has now won three straight against the Stateliners with Thursday’s 21-14 win. Phillipsburg is the winningest team all-time in New Jersey, while Easton is No. 2 all-time in victories in Pennsylvania.  Easton leads the all-time series 64-42-5.

Next week, Phillipsburg (10-1) will try to rebound when it plays North Hunterdon for the New Jersey North 2 Group 4 sectional championship to close-out its season. New Jersey only crowns sectional champs, not a true state champion.  The Stateliners were ranked No. 9 in the latest High School Football America New Jersey Top 10.

The oldest Thanksgiving Day high school football rivalry comes from the Land of the Pilgrims, otherwise known as Massachusetts, where Needham and Wellesley played for the 130th time on Thursday.  The first game between the two was played in 1882.

Wellesley picked-off four passes to beat its arch-rival 23-20, which gives the Raiders a 62-59-9 lead in the all-time series.

At Harvard Stadium, Boston Latin quarterback Devin Vasquez threw three touchdown passes in a 22-14 victory over Boston English in their rivalry that dates back to 1887 and was played for the 131st time on Thursday.  Latin, which has now won 50 of the last 54, leads the all-time series 80-38-13.

The Latin/English game is considered the longest continuously played Thanksgiving rivalry, because Wellesley/Needham game wasn’t played from 1950 to 1952.

The first-ever high school football game in was played in 1875 in Connecticut between Norwich Free Academy and New London High School (then Bulkeley School for Boys). On Thursday, the two schools, who have only been playing on Thanksgiving since 2000, renewed their historic rivalry for the 156th time.

After falling behind 16-0 at the half, New London (4-6) stormed back to upset NFA 26-22 behind quarterback Owen George’s 332 yards passing and four touchdown passes.

In the only Turkey Day game in New Hampshire, the City of Manchester decides its “city champion” by playing the Turkey Bowl.  Manchester Central won its third straight Turkey Bowl beating Manchester West 47-22.

The oldest rivalry in Rhode Island is LaSalle Academy against East Providence, who hooked-up for the 89th time on Thursday.  LaSalle rested most of their starters in preparation for next week’s state title game against seven-time defending state champ Bishop Hendricken, which helped East Providence pick-up a 41-0 shutout victory.  LaSalle leads the all-time series 50-37-2.

In New York, Fordham Prep and Xavier played the 94th renewal of its Turkey Bowl rivalry. It is the Empire State’s oldest high school football rivalry. While the first Thanksgiving Day game between the two was played in 1905, the first-ever meeting between Fordham and Xavier was December 2, 1883.  Fordham shutout the Knights 28-0 Thursday.

Red Bank, which had won only one game coming into the contest, shocked their rivals 21-20 in overtime.  Next week, Long Branch (8-3) will try to rebound when it plays Freehold Boro for the Central Jersey Group 4 title.  Long Branch leads the all-time series with Red Bank 61-31-3.

In Maryland, Loyola Bakersfield and Calvert Hall College played their 98th annual Turkey Bowl at Johnny Unitas Stadium at Towson University. Calvert Hall beat Loyola 27-6 to close the all-time series to 49 wins for Loyola, 41 for Calvert Hall and there have been eight ties.

In Missouri, Kirkwood won the Frisco Bell for the fifth straight year.  Kirkwood beat Webster Groves 35-7 in the 110th meeting between the two who have been playing Thanksgiving Day since 1952.  Webster Groves still holds a 58-51-7 lead the all-time series that began in 1898.

And, in San Jose, California, Lincoln played San Jose in the Big Bone Game that’s been contested since 1943.  Lincoln extended its win streak over its rivals to 20 years with a 49-14 victory on Turkey Day.  That means that Lincoln gets to keep the big cow femur for another year.