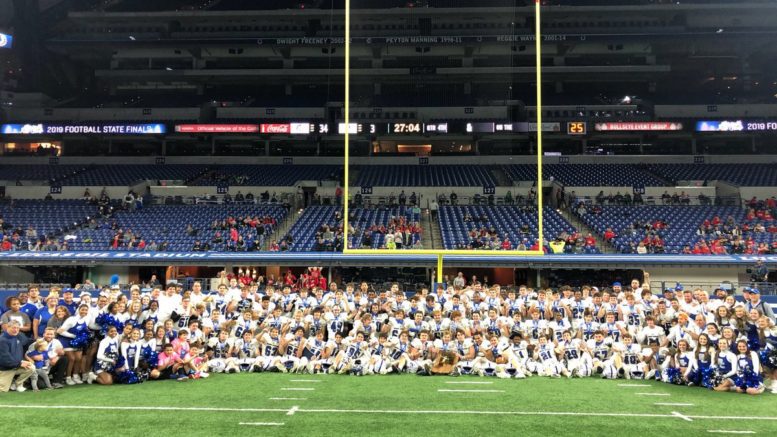 Carmel won its captured its eighth overall Indiana high school football state championship with a 20-17 win over Center Grove in the Class 6A in the state title game at Lucas Oil Stadium.

And with that victory formation the Carmel Greyhounds are the class 6A state champs! @carmelathletics @IHSAA1

The loss ended an incredible postseason run for Center Grove, which entered the playoffs with a 4-5 record.

Read a game recap from the IHSAA

In 5A, defending state champ New Palestine, ranked No. 107 in our latest national rankings, goes back-to-back. The Dragons beat Valparaiso 27-20 in a battle of unbeatens.

Recap of 5A championship game

For the second time in three years, Evansville Memorial is a state champ. After winning the 3A state title in 2017, the Tigers captured the 4A title with a 20-3 victory over East Noble.

Read 4A game recap by IHSAA

Chatard beat Heritage Hills 34-3 for the 3A title.

For the state record-extending 14th time, the Indianapolis Bishop Chatard Trojans are the #IHSAA Class 3A Football State Champions! 🏈🏆🥇 pic.twitter.com/BKsLHqcfYl

Recap of the 3A title game by IHSAA

Spencer Wright ➡️ Connor Garrity ➡️ TOUCHDOWN@WeBoFootball builds on their lead in the @IHSAA1 2A championship.

Recap of 2A title title game from the IHSAA

And, in Class A, Lafayette Central Catholic won its eighth state title by scoring a 2-point conversion with ten seconds to go against Indianapolis Lutheran. Clark Barrett’s 2-point pass to Reece Buche gave LCC to a 29-28 victory.