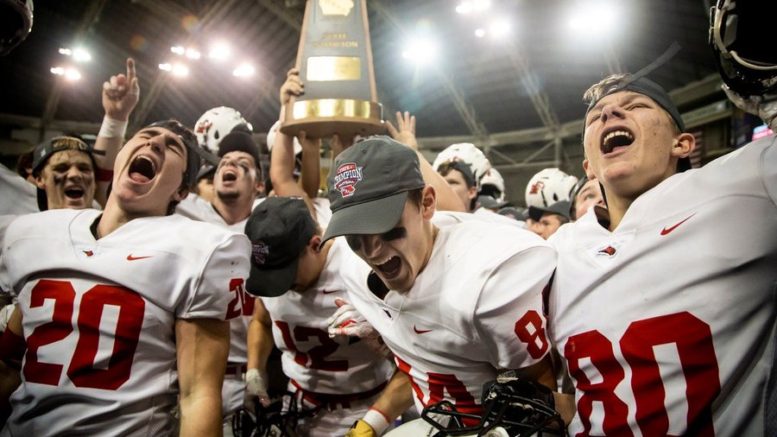 West Dubuque won its first Class 3A Iowa high school football championship since 2001 with a 37-17 win over Solon. Bobcats quarterback Calvin Harris had an outstanding game throwing for 203 yards with touchdowns and rushing for 85, averaging 11.5 yards per carry.

Here’s the look at the @iowa_corn play of the game 🏈 70 yard TD 💯 pic.twitter.com/YdzxqCboKQ

Western Dubuque entered the game ranked No. 3 in our Iowa Top 10 while Solon, which suffered its first loss of the season, was ranked No. 9. WD finishes with a perfect 13-0 record.

In the 2A title game, OABCIG (Players from Odebolt, Arthur, Battle Creek and Ida Grove) won its first state title with a 37-12 win over Waukon. OABCIG finishes with a perfect 13-0 record.

My Siouxland friends will get a kick out of this… An ALL TIME call from @MurphyKeith during tonight's 6pm sportscast. Congrats to @OABCIG on their Class 2A championship! #iahsfb pic.twitter.com/qEmLFrg9a1

West Lyon dominated Van Meter 50-14 to win the Class 1A championship. The championship is the fifth overall for the Wildcats.

For the first time since 1996, West Hancock can call itself state champs. The Eagles beat Grundy Center 21-17 for the state Class A championship.

The 8-Player championship is back in the hands of Don Bosco as it won its fourth title since 2013 with a 35-19 win over Audubon.