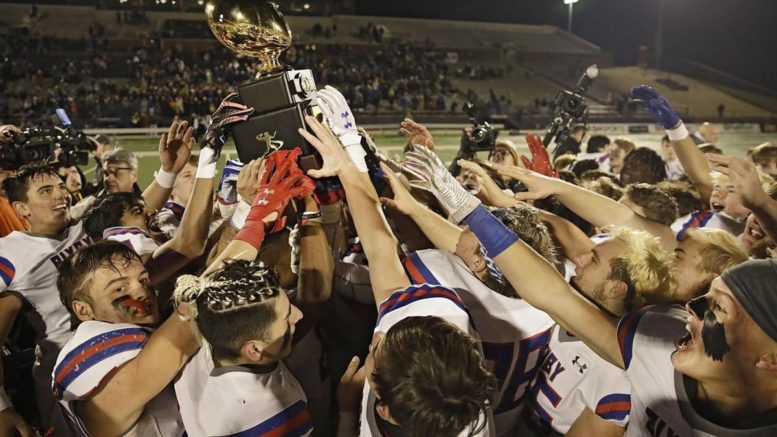 For the fifth time in six years, Bixby is an Oklahoma high school football state champ. Bixby, which entered the game ranked No. 103 in the High School Football America national rankings, beat Stillwater 40-36 to capture the Class 6A-II state title before over 7,000 fans at Central Oklahoma University.

Bixby had to battle from behind several times. The Spartans trailed 17-3 going into the second quarter, but led 19-17 at the half. Bixby led 33-23 earlier in the fourth quarter, but with just over three minutes to go in the game, Stillwater took a 36-33 after running back Qwontrel Walker scored on a 79-yard rushing touchdown.

This Qwontrel Walker (@Qwontrel1) 79 yard touchdown run was one of the best I’ve seen covering #OKPreps ball — especially considering it gave Stillwater the lead at the time … but they’d eventually fall short against Bixby. pic.twitter.com/NkjpamYj5D

Mason Williams 12-yard screen pass to Braylin Presley proved to be the game-winner with 1:04 to go in the game.

This may be one of the best high school football games I’ve seen. Bixby takes a late 40-36 lead against Stillwater. Back and forth. Two best teams in the state. Perhaps regardless of class. #okpreps pic.twitter.com/lmCe1mSSd2

Stillwater quarterback Gunnar Gundy, son of Oklahoma State head coach Mike Gundy, was playing in his second straight Oklahoma state championship against Bixby. In 2018, as the quarterback at Midwest City, Gundy lost to the Spartans 24-21.

BIXBY SPARTANS celebrate with their fans after downing STILLWATER 40-36 for their 5th title in the past 6 years in CLASS 6A-II FOOTBALL.#okpreps @HomeofSpartans pic.twitter.com/3PdCUcjITn

Carl Albert made it four straight state titles with a 30-15 win over Bishop McGuiness in the 5A title game. Carl Albert has now won 15 overall state titles. Over the last four years, Carl Albert owns a 54-2 record.

The 4A title goes to Poteau after a 9-7 win over Weatherford.

POTEAU PIRATES are your 2019 CLASS 4A FOOTBALL STATE CHAMPIONS. With a 9-7 win over Weatherford. Their 1st football state title! pic.twitter.com/epfzpGMtgO

Lincoln Christian topped Plainview 42-21 for the Class 3A championship.

Metro Christian finishes 15-0 with a 42-34 victory over Vian in the Class 2A state championship. It’s the first-ever football title for Metro Christian.

Ringling won the Class A title with a 20-14 win over Cashion.

For the third straight year, the Class B title goes to Shattuck after 24-19 win over Regent Prep. Shattuck now owns twelve state titles.

It is the INDIANS 3rd straight title (4 of the last 5) and they extend their state leading win streak to 35, finishing 14-0 this season. pic.twitter.com/T2P9oPsTU6

The Class C championship goes to Pond Creek-Hunter with a 54-8 win over Waynoka.

Owasso finishes No. 1 in Oklahoma Top 10