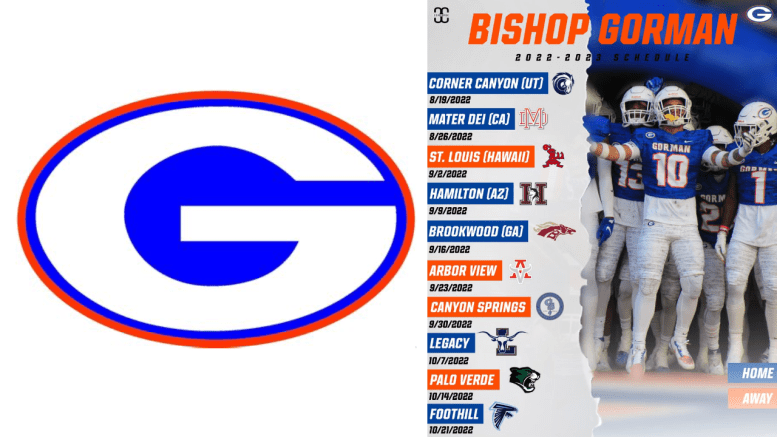 Every year Bishop Gorman plays one of the toughest out-of-state (OOS) high school football schedules in the nation. And, 2022 will be no different.

The Gaels’ 2022 schedule is out with opponents from five different states lining-up against the 11-time Nevada state champs. Four of the five OOS opponents finished last season in the High School Football America 100, powered by NFL Play Football.

Highlighting the schedule will a Week 2 matchup against three-time defending national champ Mater Dei (California) at home. It will be the third contest between the two high school football heavyweights.

Mater Dei has won both matchups, including in 2017, which snapped the Gaels 55-game win streak.

Gorman, which finished the season ranked No. 15 in our national rankings last year, will open the season against Utah-power Corner Canyon. Last year, the Chargers saw their run of three straight state championships end. CC finished No. 109 in the nation.

The good news about the schedule is four of the five out-of-state games will be at home at Gorman’s Ferritta Field. The only away game, at the start of the season, will be against Hawaii-power St. Louis on September 2.

On September 9, Gorman will try to avenge its only 2021 defeat when it hosts Arizona’s Hamilton High School. The Huskies overcame a 17-point deficit in last year’s game to win 25-24. Hamilton went-on to finish No. 37 in the HSFA 100.

The fifth non-Nevada game will be against Brookwood from Georgia. The Broncos finished No. 180 in the nation last season after advancing to the 7A state quarterfinals.