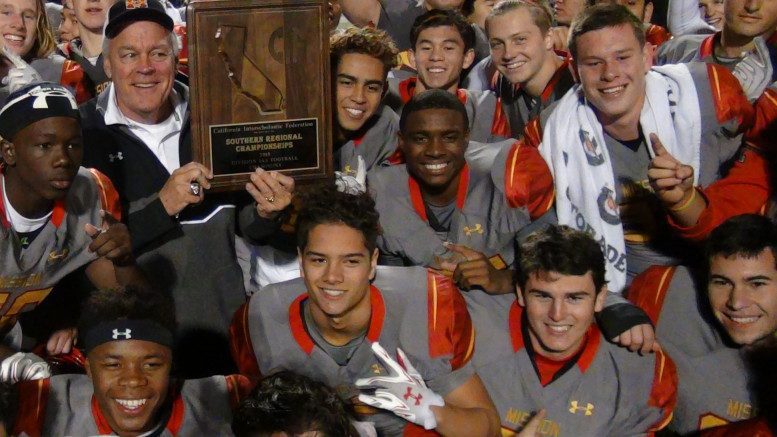 Legendary Mission Viejo head football coach Bob Johnson will be doing something next week that he’s never done in his long career — coach in a state championship game.

Mission Viejo, ranked #21 in the High School Football America National Top 25, advanced to the CIF Division IAA State Bowl Championship game next week after beating Helix 32-28 in a see-saw battle in the south region final.  The Diablos will play Bellarmine in the championship game, the first ever for the school.

Helix (11-2), ranked #9 in High School Football America’s California Top 25, gave the unbeaten Diablos all they could handle, thanks to an outstanding performance by Highlander mighty-might running back Nate Stinson, who carried the ball 24 times for 277 yards and four touchdowns.  Stinson, who entered the game with 1,714 yards and 31 touchdowns, scored on runs of 2, 61, 42 and 93 yards.

Mission Viejo also had it own battering-ram in junior running back Colin Schooler, who ran the ball 38 times for 160 yards and two touchdowns.  Schooler’s last TD with 1:59 to go in the game gave the Diablos their 27th straight victory.

MV senior quarterback Brock Johnson also played a critical role in getting his grandfather into the school’s first state championship game.  Johnson was 15-of-21 for 241 and two touchdowns — both to Austin Osborne.