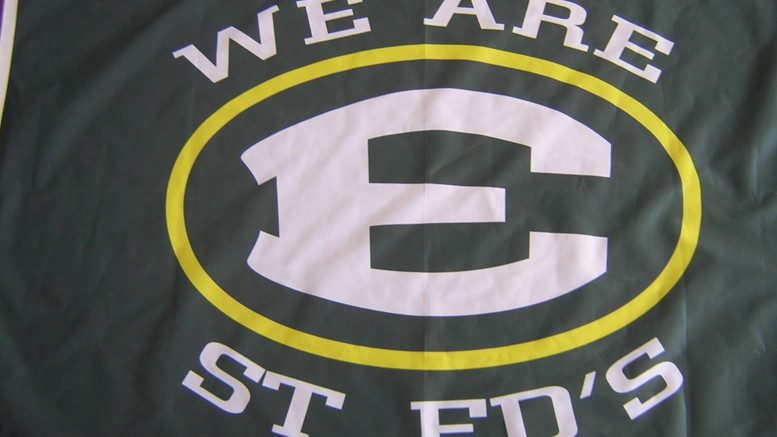 Here’s that Keefe to Jones TD pass that put St. Ed’s up 24-21. pic.twitter.com/SREWkA4HHW

St. Edward (Lakewood, Ohio) made a strong case to return to the Super 25 rankings with a 31-28 victory against No. 22 Bergen Catholic (Oradell, N.J.) on Saturday.

Bergen Catholic took the lead 21-17  midway through the third quarter. Less than three minutes into the fourth quarter, St. Edward answered with a 16-yard touchdown pass to Carl Jones on third-and-5 for a 24-21 advantage.

St. Edward forced Bergen to punt on its next possession and Kyle Fallon took the return 54 yards into the end zone for a 31-21 edge with 7:40 remaining.

The Crusaders then pushed the ball downfield and capped a scoring drive with a 13-yard TD reception by Korab Idrizi to cut the St. Edward lead to 31-28 with 3:56 left.

St. Edward was able to convert three first downs to run out the clock and avenge a 14-10 loss to Bergen last year in New Jersey.

Cole Gest had 134 total yards, including 61 on the ground. He scored the game’s first score on the second play of the game, a 70-yard screen pass. St. Edward QB Jimmy Keefe had 254 yards passing and threw for three touchdowns.

Bergen Catholic lost its second consecutive game against a national-level opponent after falling to IMG Academy last week. Much ass he did against IMG, Bergen again was led by quarterback Jarrett Guarantano, a Tennessee commit.

Guarantano was 25-for-37 passing for 337 yards and also ran for 70 yards and another two scores. He had another 55-yard rushing touchdown called back.

The Turnaround: Question, where has commitment gone?