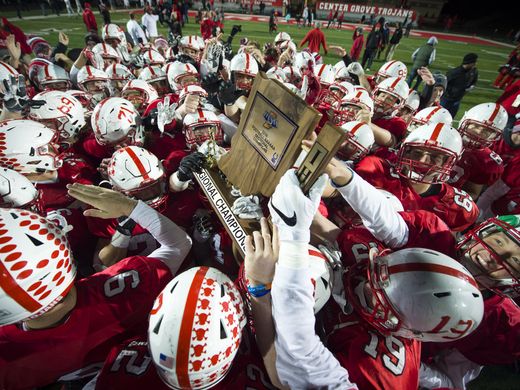 Center Grove, which began the season ranked #22 in the High School Football America Preseason Top 25, is likely to return to the Top 25 on Sunday when we release our new rankings.  The Trojans, ranked #28 in our Top 50, return will be made possible because of their 28-7 defeat of #15 Warren Central in the Indiana 6A state quarterfinals Friday night.

Friday night’s win avenged a 21-16 season opening loss by Center Grove to the Warriors.  CG running back Titus McCoy, who injured his ankle in the first game in August, had a big night with 21 carries for 83 yards and three touchdowns.  Also pitching-in was Russ Yeast, who became the team’s leading rusher during McCoy’s healing process.  Yeast led the way with 97 yards on just 13 carries Friday night.

Next week, Center Grove will play Ben Davis in the state semifinals.  The winner will face the winner of the other semi between Carmel and Penn in the state championship on November 25th.