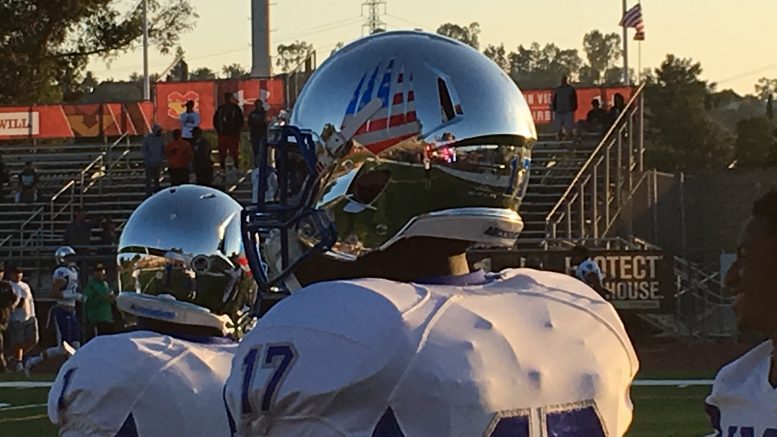 In a heavyweight prizefight between evenly matched fighters, the winner usually is the one that can absorb the big blows and then bounce-back to deliver his own.  Saturday night, #3 IMG Academy (Bradenton, FL) absorbed a 14-0 blow by #24 Corona Centennial (California) before being able to start throwing its own knockout blows and eventually surviving a 50-49 shootout at the 2016 Honor Bowl in Mission Viejo, California.

The tale of the tape — 99 points, five ties, two lead changes and over 1,000 yards in total offense with both teams topping the 500-yard mark.

“It wasn’t really the type of game we wanted,” said IMG Academy head coach Kevin Wright. “They are a tremendous football team and we knew whoever had the ball last was going to win.”

After falling behind 14-0 early in the second quarter, IMG was able to rally behind quarterback Kellen Mond, who has given his verbal commitment to Texas A&M.  Mond ran for a score and then passed for a touchdown to send the two teams to the locker room tied at 14.

“We had to just keep fighting,” said Mond. “We all woke-up early, because we knew it was Game Day, so we were a little tired, but we knew we had to get after it.”

The game ended around 10:30 P.M. Pacific Time, which meant that it was actually 1:30 A.M. in Florida, where the team left on Friday to head to Southern California.

Both teams continued to trade blows in the second half with IMG jumping-out to a 21-14 lead early in the third on Mond’s second of four touchdown passes.  That was followed by ties at 21, 28, 35 and 42.

Centennial took its first lead since 14-7 at the 1:06 mark with a Miles Reed TD run, which gave the Huskies a 49-42 lead. IMG actually allowed Reed to score in order to get the ball back with enough time two try to drive for a tying score.

“It’s always a roll-of-the-dice to let them score,” said Wright about the decision to allow Centennial to score.

Centennial head coach Matt Logan had actually considered going for a two-point conversion, but decided to kick the extra point for the seven-point lead.

IMG then got the ball at its own 20 and drove the field, cutting the lead to one when Mond connected with Brian Hightower for a circus-catch touchdown with 12 seconds remaining.   That’s when Wright decided to go for the two-point conversion and the win.

Mond’s shovel pass to Asa Martin worked perfectly and proved to be the knockout punch in the 50-49 win.

“There was no doubt,” said Wright when I asked about his decision to go for two and the win. “We travelled this far, so we were going for two on that one.”

“We’ve had that play in for a long time, probably since the start of the season,” said Martin. “I knew it was going to be wide open (shovel pass), because they’re next expecting it.”

“It was a great play call,” said Mond. “We’ve had that two-point play set for about three weeks now and we were waiting for this moment.”

“We definitely battled and competed, so I’m happy with that,” said Logan. “We made way too many mistakes, especially some dumb penalties. We’re not going to see another team like this, so it’s definitely prepared us for the rest of the year.”

Logan described his running back Miles Reed as a “warrior” after carrying the ball 40 times for 162 yards and three touchdowns.

Aside from Mond’s four TD throws he also ran for one and he gave a big hug to his QB counterpart Tanner McKee during the postgame handshake.  McKee, who is a junior, threw for 361 yards with three touchdown passes to Xavier Marshall, who ended the game with 13 receptions for 204 yards.

Next-up for IMG is a game against Booker T. Washington from Tulsa, Oklahoma.  That game is part of the Battle on the Border High School Football Showcase in Shreveport, Louisiana next weekend. Centennial will play Orange Lutheran from Southern California’s ultra-tough Trinity League on Friday.