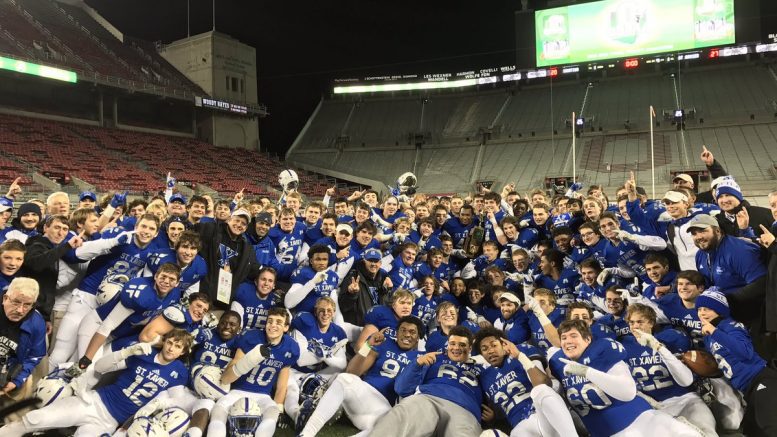 Don’t look at St. Xavier‘s 10-5 record and think this isn’t a team worthy of wining the 2016 Ohio Division I state championship.  Friday night, the Bombers became the first team Ohio high school football history to capture a state title with five losses by beating St. Ignatius 27-20 in double overtime, completing a season that saw St. X play the toughest schedule in the country, according to High School Football America’s proprietary algorithm that creates our national rankings.  St. X entered the game ranked #31 in the nation, while St. Ignatius was #22.

After both teams kicked field goals in the first overtime, St. Xavier took a 27-20 lead when Penn State-recruit Sean Clifford tossed a seven-yard TD pass to Andrew Wittrock.  On St. Ignatius’ possession, the Wildcats had a fourth-and-goal from the 10-yard line, but a pass attempt was incomplete and St. X captured their third state title.  The other two came in 2005 and 2007.

The state championship win also avenged a 31-14 loss to St. Ignatius during the regular season.

How tough was St. Xavier’s schedule?  All of the losses were to teams that are in our National Top 50.