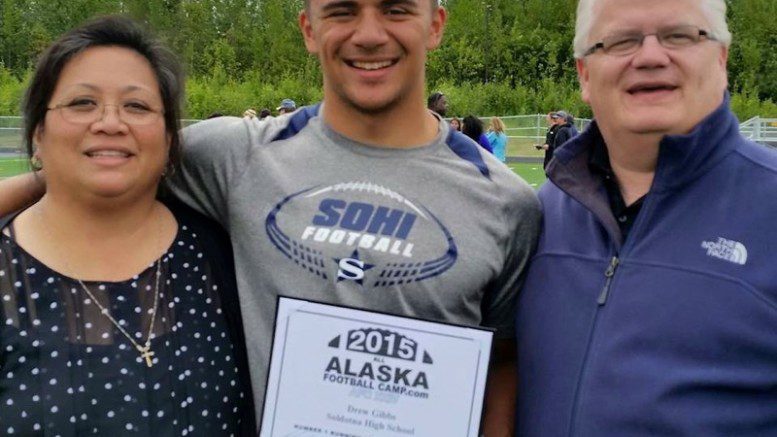 My name is Drew Gibbs. I’m a seventeen year old senior at Soldotna High School in Alaska.  We call ourselves SoHi.

Soldotna is a small town.  We have a population of a little over 4,000 during our long winters, but it goes up to over 10,000 during our short summers.  We’re a pretty big town for what is classified as “rural” Alaska.  Fishing, tourism and high school football are the three things we do the best.

Soldotna HS is one of the football powerhouses in the state of Alaska. From 2012 to now, we’ve won three straight Alaska Medium School state titles and current own a 33-game win streak, which is the longest in state history.

My dad Trey is a huge football fan, so no one is surprised that football is my favorite sport.  He explained the Dallas Cowboys’ offensive/defensive strategy to me from the time I could walk.  Saturday college games and Sunday NFL games were the best days of the week for us.  We watched every game we could.

I started playing organized football when I was nine years old.  I was lucky to have Pop Warner coaches who cared about keeping us interested and challenged in the game.  We competed locally and in the big city (Anchorage – population 350,000).  There was good competition and I learned a lot.

I worked out on my own too.  We live outside town, so I rode my bike into town to practice football drills by myself on the high school field. I ran hills and also laps on the high school track. I kept thinking to myself “stronger… faster.”  The high school coaches noticed me on their fields and watched me play Pop Warner. My hard work was rewarded when I was allowed to tryout for the SoHi varsity team as a freshman.  One of the best days of my life was opening day in 2012.  I was fourteen years old when they announced my name on the loud speaker at the field… number 28… Drew Gibbs… running back.

Since then, I’ve helped my team uphold Soldotna High School’s determination to be the best.  There are three state football championship rings on my bedroom dresser.  In my first three years, I put-up great rushing numbers and the 2015 season was supposed to be my springboard to get noticed by colleges around the nation.

My dad and I took a couple weeks this summer to visit colleges in the Lower 48 — that’s what we call states outside of Alaska.  Dad helped me reach out to these schools.  It was a great trip.  He helps me every day to communicate with coaches all over the U.S.  He stood over me at the computer every day to make sure that I worked on the prep courses for ACT and SAT.  He made sure that I was rested and up on time for the ACT and SAT tests.  He talks to me constantly to remind me that my 3.5 GPA is an important part of being what colleges call a “complete package.”  On and off the field, my dad is a driving force for my success.

On August 14, 2015, SoHi opened the season against the top ranked 4A school in the state — Anchorage’s South High — for what the state media called the “Game of the Century.”  With a victory SoHi would hold the all-time state record for most consecutive wins.

I was ready. I had trained all summer for the 2015 football season.  I started off the game with five carries for 95 yards in just the first six minutes.  Everything was going well. SoHi led, at that point, 21-7 in the first quarter.  Then my whole life/season changed in a single play.

I tore my ACL.

My high school football career had ended.  Years of hard work — time and effort —  seemed to disappear.  I was devastated.  I lost all hope of scholarship offers and college dreams.  Then I received a phone call a day after my injury.

I had received a scholarship offer from Northern State before my high school season started.  Their head coach had heard about the big game and my ACL injury.  He told us that that they would keep their word.  They would be loyal to me. My scholarship offer would be honored by Northern State.  They still wanted me.  It was the greatest feeling in the world.  It gave me so much encouragement.

Days after my injury, I received a call from head coach of the NCAA Division II National Champions, Colorado State- Pueblo.  They said they would also stand-by their scholarship offer.  Can you believe that?! The National Champions! Seriously?!  I was so happy!  My spirits lifted.  It was clear to me then that I could have a college football career.

I will be having my surgery to repair my ACL on September 10th in Pensacola, Florida with Dr. James Andrews.  It’s a long flight from Alaska to Florida, but should be worth it.  Dr. Andrews is very well known for treating and repairing many professional athletes.  I know my rehab after surgery will be a challenge, but I’m ready for it.

Even after being devastated with this injury, I knew that God was with me.  Things like this happen for a reason.  Since I can’t play right now, I’ve turned my attention to helping my high school coaches with the team.  Everyone’s been calling me “Coach Gibbs.”

I have the greatest support in the world from my family, teammates and my community.  I wouldn’t be the person I am today without all of them.  To them I say, thank you guys so much…you have no idea how much I appreciate you.

I just want to say how much I love my dad. Sometimes we take things for granted.  I have done that.  He has sacrificed so much for me. He is one of the most important people in the world to me.  I want to thank him for everything he has done to help me be who I am today.

Thank you all for taking the time to read my story.  Try to remember that even in the worst parts of our lives, there will be light at the end of that dark time. God Bless.

Drew and Trey will be a guest on this Thursday’s High School Football America Radio Show.