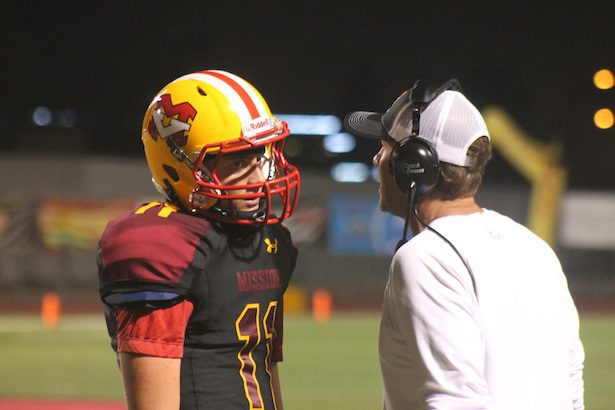 Brock Johnson talks with his dad and coach during a 2014 game. Photo courtesy of OCsidelines.com.

Brock Johnson, who last season led Mission Viejo to the CIF-Southern Section West Valley Division title, is hoping to go back-to-back in 2015.  If the younger Johnson wins his second CIF-SS title, it will match the feat that his grandfather and his father Bret accomplished in the 80’s at El Toro High School in nearby Lake Forest, California when Bret played QB for his dad.

Brock, who has completed over 67% of his passes this year, and his teammates bring a perfect 4-0 record into Friday night’s game against Norco. MV is currently ranked #6 in the latest High School Football America/SoCal Top 25, while Norco is ranked #10 in the region.

Aside from having to deal with opposing defenses over the last two years, Brock has had to deal with the pressure of being part of Southern California quarterback royalty.

Bob, the patriarch of the family, owns over 300 high school football victories and knows a thing-or-two about developing quarterbacks, aside from his kids. The elder Johnson, with the help of his sons, has run a quarterback camp that has helped develop the likes of NFL’ers Carson Palmer, Mark Sanchez (Mission Viejo alum), Drew Brees, David Carr, Joey Harrington and many others.

“It’s fun, I get to be Brock’s grandfather,” said Bob. “With his dad and Rob coaching, I have the opportunity to encourage him. He’s in good hands with his dad and uncle. I’m proud of all three of them.”

“He coaches Brock like he’s his grandson,” said Bret, who serves as Mission Viejo’s offensive coordinator and quarterback coach. “Back when Rob and I were in school, it was dad’s time to teach us the position…how to be tough, how to be a leader, how to be accurate. Now, he leaves that to me and Rob.”

“I don’t even know who dad is when it comes to Brock,” laughs Rob. “ He’s never once yelled at him (Brock), but I’m not envious. If dad hadn’t taught me the game the way he did, I wouldn’t have been able to accomplish everything I did in my career.”

“Dad’s tough on me on the field, but at home he’s my dad,” said Brock, who’s getting looked at by Ivy League schools like Harvard, Yale, Princeton and Columbia. “The best advice that my dad has given me is to relax, but play fast.“

Brock says he’s seen tape of his dad during his El Toro days when he was considered one of the country’s top quarterbacks along with Todd Marinovich at nearby Capistrano Valley High School. He says he doesn’t see much of his dad in his style of play.

“Dad was very different from me, he was scrambling and running all over the field throwing the ball,” said Brock.

“I’m very proud of Brock,” said Bret. “I think I see my competitiveness in him. As a father, the thing I try to instill in him is to be humble and appreciate and enjoy what he has.”

“We always let him (Brock) know we’re all with him,” said Rob. “He knows what it means for him to play here. It’s hard and I think he handled last year really well.”

As far as goals for this season, Brock says they’re simple — “win another CIF title and get a scholarship to play Division I college football.”

With Team Johnson behind him, both goals are within reach.