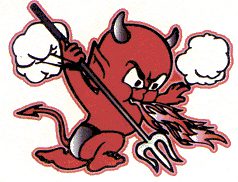 The Arizona Interscholastic Association has overturned the ejection of a Dysart High School football player, who was penalized after he pointed to the sky and thanked God after scoring a touchdown.  The excess celebration penalty resulted in Pedro Banda being ejected from the game, since he had received an unsportsmanlike penalty earlier in the contest.

Under AIA rules, any ejected player must sit-out the team’s next game, which meant Banda would miss his team’s Friday playoff game.

After hearing an appeal on the penalty, the AIA reversed the official’s decision and released this statement —

“Within the context of the game, we understand the mindset of the officials. It was a cumulative effect and the student-players gesture precipitated an additional flag for what they perceived as taunting, not as a faith gesture,” said Gary Whelchel, State Commissioner of Officials.”

“However, after reviewing the entire game video and meeting with the student-player, the Appeal Committee has decided to give the student the benefit of the doubt and overturn the call. The Committee stated that they did not find that specific action met the “excessive” or “prolonged” rule. This decision, negates the ejection and will allow the Dysart player eligibility to participate in upcoming games and tournaments.”