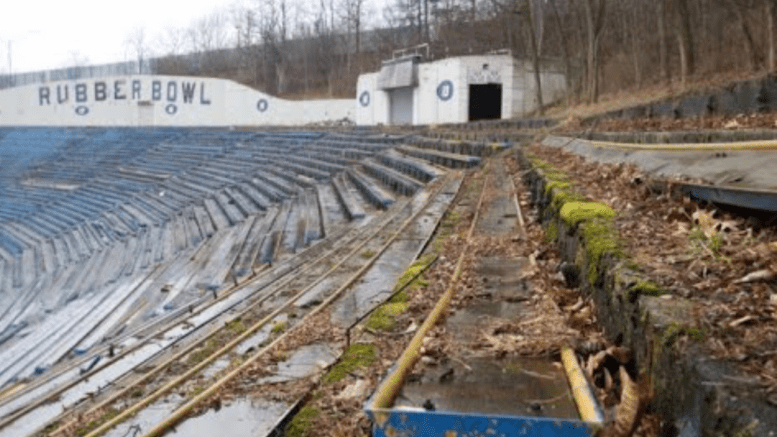 While the Akron Rubber Bowl was mostly known as the home of University of Akron Zips, the 35,000 seat stadium that will be demolished this week, it also hosted many high school football games.

After the horseshoe-shaped stadium opened in 1940, the first scholastic game was play on October 11 when 30,000 fans packed the stadium to watch defending state champion Massillon cruise to their 27th straight win with a 40-0 shutout of Alliance. Tickets for the game were priced at 25 cents.

Many in the community weren’t happy that an Akron Public Schools team wasn’t the first to play in the new stadium that was built next to the Derby Downs, home of the Soap Box Derby. On November 2, Akron schools Central and Garfield squared-off before the college game between Akron and Youngstown.

Akron Public Schools used the Rubber Bowl as the venue for the City Series championship game. The game was played on Thanksgiving Day. The final time the game played on Turkey Day was in 1990. The stadium was also used as a venue for Ohio High School Athletic Association playoff games.

In 1994, long-time rivals Canton McKinley and Massillon played a playoff game before a sold-out crowd of 34,208 fans in the Rubber Bowl. That set an OHSAA high school football attendance record. The ’94 game was the 101st in the series that dates back to 1894. The series is known as “The War of 1894.

Below, you can watch highlights of the ’94 playoff game that was won by McKinley 27-20.