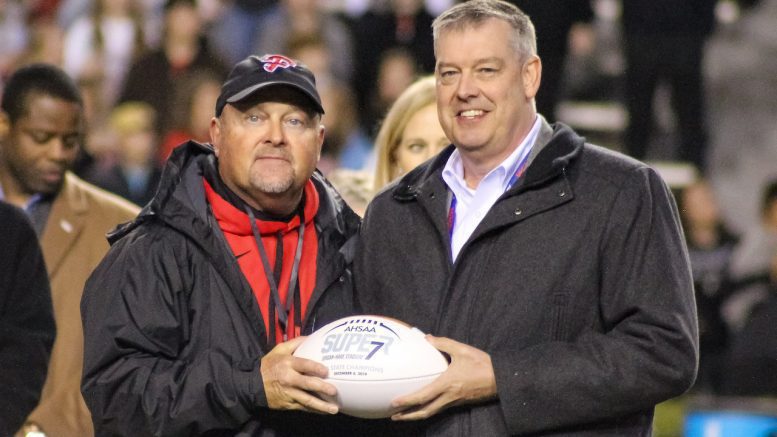 Below you can read the complete story from our friends at PrepsNet.com.

Montgomery, AL – Fyffe High School head football coach Paul Benefield admits there isn’t anything fancy about the Red Devils’ style of football. That is, unless, you fancy winning.

Benefield’s teams have done a lot of winning – more than any other high school in the Alabama High School Athletic Association (AHSAA) in this decade. Fyffe, who was elevated to class 3A this season, handed their beloved coach a 49-20 win over DeKalb County rival Sylvania last Friday. The triumph was the 300th in his head coaching career, which is now in its 29th season.

“It’s special. It really is,” Benefield told Sand Mountain Reporter sports editor Shannon Allen. “It’s something that I hope my family and all my kids that played for me will be proud of too. The Lord’s blessed me in lots of ways and put me where I need to be right here.”

The victory improved the Red Devils to 3-0 this season and earned Fyffe this week’s AHSAA Football Spotlight for Week 3 of the 2020 football season. Benefield and Fyffe have been setting tall standards for some time now. His career record is now 300-53, a state-leading 85% winning percentage. He is 255-42 at Fyffe in 24 seasons.   The Fyffe High and Jacksonville State grad posted a 46-18 mark at Sylvania his first five seasons from 1992-1996.

Since 2016, Fyffe has gone 60-1, won its last 33 games in a row, won three Class 2A state championships and own a 17-1 playoff record. Win No. 300 came 28 years to the day after he posted his first victory. Win No. 1 came on September 11, 1992 when Benefield, coaching at Sylvania, notched his first coaching victory with a 2-0 shutout over Ider. Turn the clock forward to September 11, 2020 and Fyffe beat his old team giving up the Red Devils’ first points of the season in the 49-20 win.

Benefield has proven time and time again his winning ways were no passing fancy. In fact, most years, the Devils score more rushing touchdowns than pass attempts.

Benefield joins an elite class of 300 winners in the AHSAA. He becomes the fifth coach to win 300 games all in the AHSAA. The 300-club currently includes:

Buddy Anderson of Vestavia Hills, Terry Curtis of UMS-Wright, Danny Horn of Central-Clay County, Jamie Riggs of Houston Academy, Waldon Tucker of Fayette County, Glenn Daniel of Luverne and Fred Yancey of Briarwood Christian. All but Daniel and Yancey are still coaching. Tucker had 25 of his 310 wins in Alabama outside the AHSAA, and Yancey posted 41 of his 319 wins at schools in other states. Anderson, 342-158, plans to retire after this season, his 43rd year at Vestavia Hills.