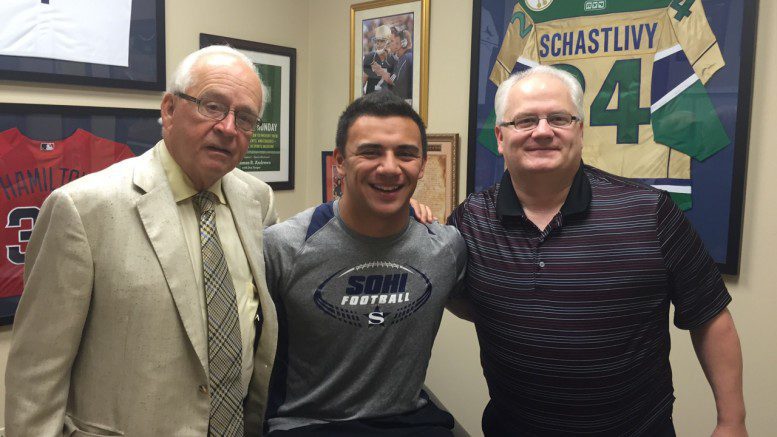 As we all know, Alaska isn’t the hotbed of high school football in America, but I do love a great story.

When Trey Gibbs, father of Soldotna Stars‘ running back Drew Gibbs, contacted me last month about his son’s knee injury, I was fascinated by the bond between the two and the lengths that Trey was going to make sure his son’s dream of playing college football wouldn’t die with his knee injury that occurred in the first week of the high school football season in Alaska.  Gibbs has been Soldotna’s star running back for three straight Medium School state championships.

Last season, Gibbs who averaged 8.8 yards rushing and was named the state’s Medium School Offensive Player of the Year.

I was especially fascinated that Trey would go to the ends of the earth, or at least Florida, to make sure that Drew’s knee was properly taken care of.  I say Florida, because that’s where Drew will undergo surgery on Thursday with renowned orthopedic surgeon Dr. James Andrews, who Trey contacted on a whim.

Drew, who holds several college offers, including one from defending NCAA Division II national champion Colorado State-Pueblo, now believes that his college football dream didn’t end when his senior season ended in mid-August.  He says he’ll work hard to rehab and share his journey with our readers in the blog A Family Affair.

In addition to writing about his rehab, Drew will also chronicle his time as an “assistant coach” of Soldotna.

We wish Drew and his entire family a successful surgery tomorrow and look forward to sharing his story with all of our readers.

And, for those of you wondering, I could only find two Alaska high school football players that have made it to the NFL — Mark Schlereth, former NFL offensive lineman and current ESPN analyst, who played at Service High School and another offensive lineman, Daryn Colledge, who played for North Pole High School and was a 2006 second round draft pick by the Green Bay Packers.

Who’s in the CIF-SS Pac 5 playoffs