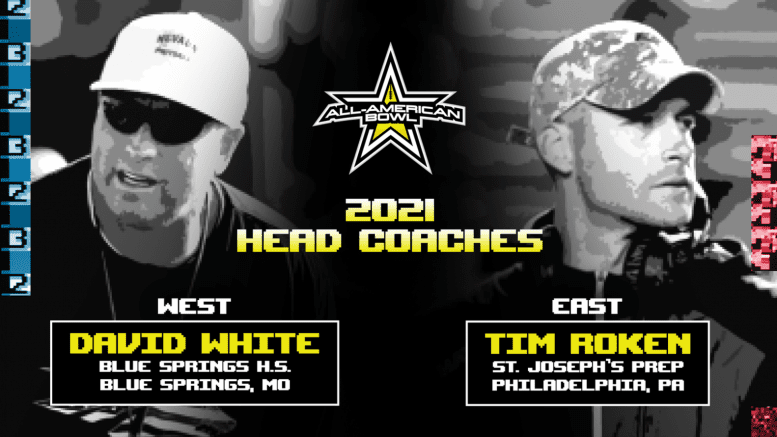 Tim Roken of St. Joseph’s Preparatory School (Philadelphia, Pennsylvania) and Coach David White of Blue Springs High School (Blue Springs, Missouri) will be the head coaches for the 2021 All-American Bowl. Roken will handle the East All-Stars, while White will handle the West squad.

Roken led the Hawks to a Pennsylvania 6A state championship in 2019, his first as the program’s head coach. Last year, St. Joe’s finished No. 10 in the High School Football America 100 national rankings.

“The All-American Bowl has established a great tradition that I have been blessed to be a part of in different roles in the past,” said Roken, who was an assistant in the 2015 game. “I am honored to now be selected to represent our school and community as the Head Coach in this great game.”

White is in his first season as the head coach of Blue Springs High School. White was the head coach at Bishop Gorman (Las Vegas, Nevada) from 2003 through 2007 where he coached five All-Americans and 38 collegiate players. Coach Whit also spent seven seasons at the University of Nevada, serving as the running backs coach. He also served as an assistant coach during the 2020 All-American Bowl.

“It is a tremendous honor to be a part of this prestigious game,” said White. “I’m grateful and excited to coach with other coaches across the country in the nation’s top high school All-American Bowl.”

The All-American Bowl began in 2020 and features 100 of the top high school football players in the country. The game is owned by NBC Sports, which televises the game annually from San Antonio, Texas.