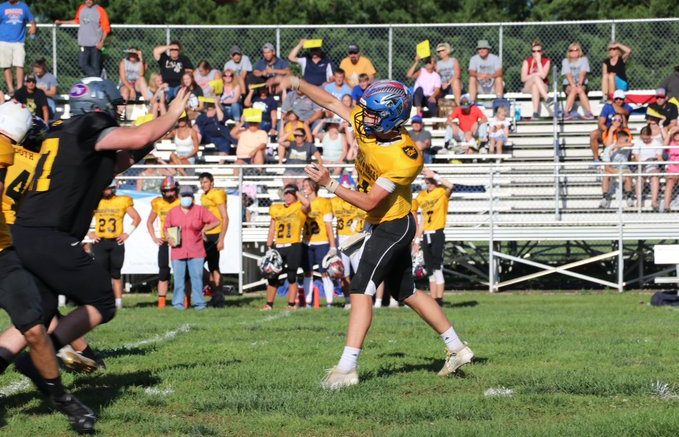 The Gold Division Stars beat the Black Division All-Stars 14-0 in a game that was postponed from Saturday night due to thunderstorms. The game is normally played at Indiana State’s Memorial Stadium, but was moved to Boys and Girls Club Park in Terre Haute.

Just like he did at North Vermillion, Brennan Ellis controlled the Wabash Valley Football Coaches Association All-Star game throwing for the games only two scores to AJ Sanders and Kalib Lawrence pic.twitter.com/ldHcwS7cXv

The Gold Division heard all the trash talk all week from the Black Division. Ethan Burgess, Brennan Ellis and Eli Royal from the Gold Team said they let their play do the talking in a 14-0 win in WVFCA All-Star game pic.twitter.com/gw3Zu06O6t

North Vermillion state champion football coach Brian Crabtree with a strong message with season up in air a month out "Vermillion County and WRC is not Marion County. What's happening in Marion County and being a hot bed. We don't have those same numbers in our rural areas". pic.twitter.com/gcBC41UDTg

There was no announcement on the attendance Monday night.

The Kansas Shrine Bowl will be played Saturday night with 2,000 fans allowed to attend the game.

Poll: Do you think they’ll be a 2020 high school football season?