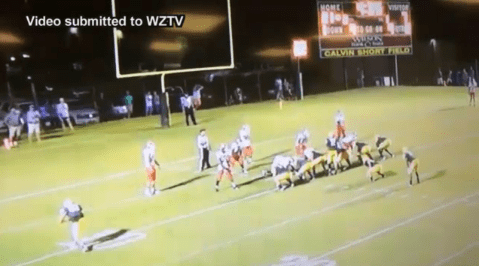 You would think that after all of the attention given to recent acts of bad behavior by high school football players, that we wouldn’t have to report on any more incidents.

Another incident between a player and a football official began last week in a game in Tennessee between Gallatin High School and Glencliff High.

As you can see from the video above, A Glencliff player identified as Malcolm Easley by The Gallatin News, hits the referee.  It is reported that Easley, who is the son of Glencliff head coach Brandon Easley, was assessed a personal foul and allowed to continue playing.

The story goes on to state that the Tennessee Secondary School Athletic Association decided not to hand-out any additional punishment.  Assistant Executive Director of the TSSAA, Matthew Gillespie told The Gallatin News, “We have reviewed the tape several times and based on what we reviewed there was no intent to target the official.”

However, The Gallatin News is reporting that there may be more to the incident, based upon the following excerpt for its story —

A source who was on the field during the game told The Gallatin News that Easley was told by the umpire earlier in the contest that he was “getting way too close” to the referees. On the play before the disputed play, Easley can be seen putting his hands on the back of the official.

he Tennessean reported that Easley has been suspended for by his team.

Malcolm’s father and head coach Brandon Easley told The Tennesseean, “He has been given his punishment from the school, his head coach and his parents. There’s a couple things he will be doing to make this right. It’s a game off, it’s (attending) classes, it’s the letter to the official.”