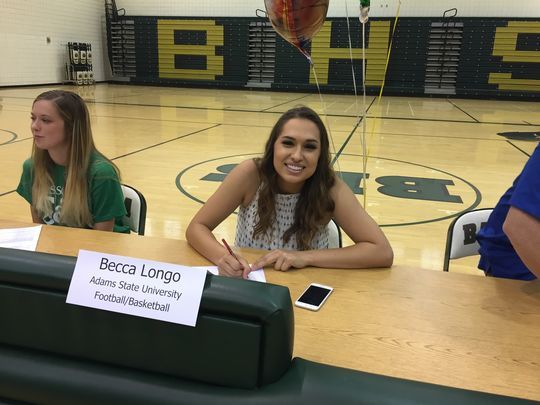 It is believed that Basha High School (Chandler, AZ) kicker Becca Longo made history on Wednesday when she became of the first female athlete to sign a Letter of Intent to play college football.  Longo, who connected on 30 of 33 extra point attempts in 2016, signed with Division II Adams State in Colorado during a ceremony at her high school.

Long told AZCentral.com, “I contacted them during the season, and after the season I got contacted back by them. The offensive coordinator (Josh Blankenship), he told me he wanted me to come out for a visit.  I went on my visit and I absolutely fell in love.”

Adams State head coach Timm Rosenbach, who played quarterback in the NFL with the Phoenix Cardinals, throwing for 16 touchdowns in 1990, told AZCentral.com he believes Longo’s signing his historic, “I never heard of it before. My wife is a former pro athlete. I see her (Longo) as a football player who earned it.”

Longo is also expected to play basketball at Adams State.