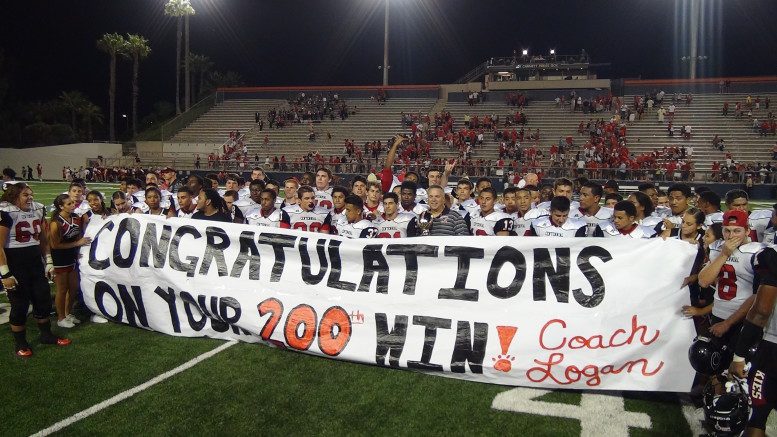 The two top teams in the latest High School Football America showed Friday night that they are deserving of their lofty position in our algorithm rankings.

#1 Corona Centennial (3-0) found itself in a 7-7 battle at halftime with #8 Orange Lutheran, before pulling away for a 35-14 victory.  Second-ranked St. John Bosco topped the sixty point mark for the third straight game as its whipped two-time defending Oregon 6A state champ Central Catholic 66-17 in Portland.

Centennial put-up 28 second half points thanks to a fine performance from  its Big 3 — quarterback Anthony Catalano, running back J.J. Taylor and wide receiver Javon McKinley.

It was Catalano’s 60-yard touchdown run at the start of the second half that jumped-started the Huskies’ offense, giving Centennial a lead it would never relinquish.  Catalano finished with 140 yards rushing and 270 yards passing.  Taylor, who scored three touchdowns, ran for 136 yards and McKinley caught ten balls for 201 yards and the final touchdown of the game.

Orange Lutheran fought hard throughout the game behind Harvard-bound QB L.J. Northington, who threw for 252 yards.

The victory was the 200th for Corona Centennial coach Matt Logan, who was happier after the game about the way his team responded in the second half than his personal milestone.

After the game, OLu head coach Chuck Petersen told OCVarsity.com’s Dan Abano, “(I’m) disappointed we didn’t win. We’re not here to be competitive. We’re not here to make it look good in the end. We’re here to win a football game and we prepared that way and I thought we fought our guts out.”

In Portland, it was another offensive explosion for St. John Bosco with Sean McGrew leading the way with three second quarter touchdowns.  McGrew, who has verbally committed to the University of Washington, finished with 179 yards rushing and four total touchdowns for the Braves, who improved to 3-0.

Related: Centennial ranked #3 in the nation in the High School Football America Top 25, while St. John Bosco is #6

#6 Mission Viejo (4-0) had all it could handle in its game against #25 La Habra (2-1).  The Diablos beat La Habra 24-14 without its top lineman Zack Aylor and running back Isaiah Miller, who were out with injuries.  Quarterback Brock Johnson picked-up the slack with 219 yards and a touchdown.  Colin Schooler sealed the win with a Pick-6 with 2:30 to go in the game.

#11 Serra (Gardena) bounced-back from last week’s loss to top-ranked Corona Centennial with a 43-0 shutout of Carson.  Khalil Tate, who sat out last week’s game while serving a suspension, ran for 130 yards and two touchdowns and passed for 112 yards.

#16 Narbonne (1-1) was able to bounce-back from last week’s last second loss to #5 Long Beach Poly (idle this week with Bishop Gorman on Friday) with a 45-17 win over Palos Verdes.  Quarterback Roman Ale threw for 355 yards and five TDs.

Rancho Cucamonga (2-1) quarterback Angel Matute threw three first half TDs to lead the #17 Cougars to a 35-10 win over Don Lugo.