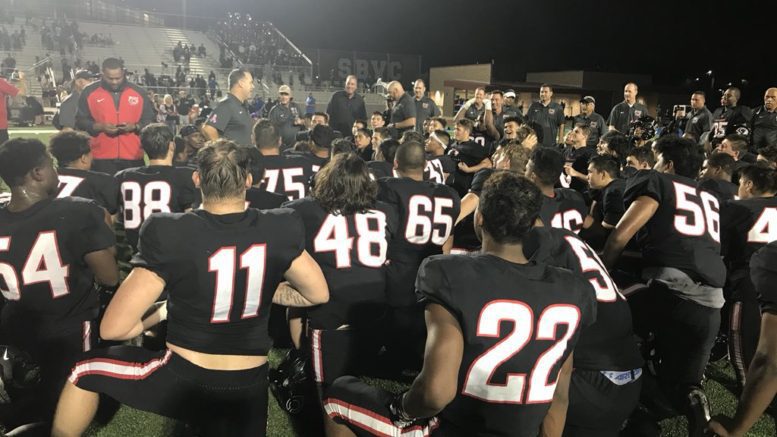 As I’ve always said, our proprietary algorithm’s works best when the action gets going on the field. When our first in-season Top 100 comes out Sunday, several teams will see upward movement thanks to impressive performances Friday night.

In California, No. 26 De La Salle showed it’s not ready to give up its title of NoCal power. The Spartans defense was rock solid in a 14-0 shutout of No. 24 Folsom. The DLS defense forced five turnovers against a Folsom offense that features eight returns from last year’s Division I-AA state championship team.

It was the first time that Folsom had been shutout since 2004. De La Salle now owns a 291 game win streak against northern California opponents.

Folsom QB Kaiden Bennett watches De La Salle take the victory formation and run out the clock en route to a 14-0 win over the Bulldogs in Week 0. Folsom coaches very proud of the defense holding the Spartans scoreless through the first half. Next up for Folsom: Jesuit @ABC10 pic.twitter.com/QAETcG80HA

And, speaking of a team not ready to be outside of the Top 25…Corona Centennial, which came into Friday night’s ranked No. 40 in our Preseason 100, didn’t have any trouble in its 35-13 against two-time defending Arizona 6A champ Chandler, which was ranked No. 22 in our preseason national rankings.

Using a two-headed quarterback, the Huskies jumped out to a 21-0 lead behind two Carter Freedland touchdown passes. Freedland is a transfer from Mater Dei. He finished 11-of-18 for 186 yards.

Gary Bryant caught three touchdowns of 50, 64 and 70 yards. He finished with nine catches for 265 yards.

Here’s the post game interview with Head Coach Matt Logan🎥
#17 Huskies win their first game against #10 Chandler with a final score of 35-13. pic.twitter.com/kreeltAL8K

Let’s stay in SoCal where No. 1 Mater Dei and No. 4 St. John Bosco both opened with solid wins.

The defending national champs began the post-JT Daniels Era with a 42-14 win over Bishop Amat. Shakobe Harper ran for 162 yards on just 13 carries with two touchdowns. Oregon-recruit Sean Dollars ran for 119 yards with three touchdowns as the Monarchs scored all six of its touchdowns on the ground. As a team, Mater Dei ran for 369 yards.

After three years on the road, Bosco returned home to a brand new stadium with the same old result…a W. The Braves shutout Timpview (Utah) 49-0. George Holani ran for 117 yards in the victory.

In Indiana, No. 19 Warren Central opened with a 27-15 win over No. 69 Center Grove in the Metropolitan Interscholastic Conference. Romeir Elliott rushed for 135 yards and three touchdowns.

Carmel (Indiana), ranked No. 114 in our preseason rankings, beat two-time defending Kentucky champ Trinity, which entered the year ranked No. 23 in the HSFA 100. The 24-21 victory snapped Trinity’s 30 game win streak.