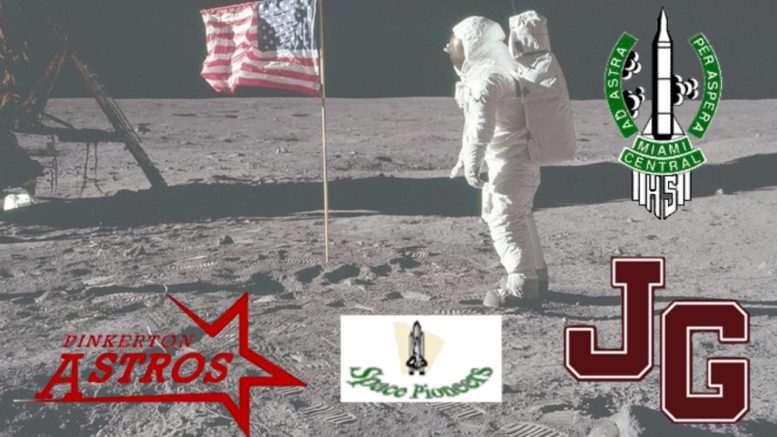 To honor the brave men of the Apollo 11 moon landing, I thought it would be fun to look at high schools that carry nicknames that are connected to space travel.

I start with the most popular name — the Rockets. 108 schools carry that moniker, according to the websites High School Nicknames.

Four high school football teams are known as the Astros — East Clinton (Ohio), Frederick Douglass (Georgia), Pinkerton Academy (New Hampshire) and Shepard (Illinois), which is named after Alan B. Shepard, the first American astronaut to travel into space. Shepard actually graduated from Pinkerton in 1940. The school named its teams the Astros following the original 1961 space flight. The high school’s mascot is “Astro Man” and buildings on-campus are named after him.

For those of you wondering about the word itself — Astronaut gets the “astro” from the Greek word astron, meaning “star,” making an astronaut a “star sailor.”

Then there’s John Glenn, the first astronaut to orbit the earth. There are several schools around the nation named after him, including Glenn High School in Westland, Michigan that is known as the Glenn Rockets.

In Florida, Astronaut High School was opened in 1972 in Titusville, near the John Kennedy Space Station. The football program, known as the War Eagles, has produced two NFL players — Chris Collinsworth and Wilbur Marshall.

Glenn was a high school football player at New Concord High School in Ohio. While the school did change its name to John Glenn High School, its nickname is the Little Muskies. Glenn played center — just like Buzz Aldrin did at Montclair High in New Jersey — and linebacker on New Concord’s varsity team.

And, we end with the Space Pioneers from Northwest High School in Indianapolis, Indiana. The school was built in 1962-63, adopting the nickname as a reference to America’s man-in-space program.