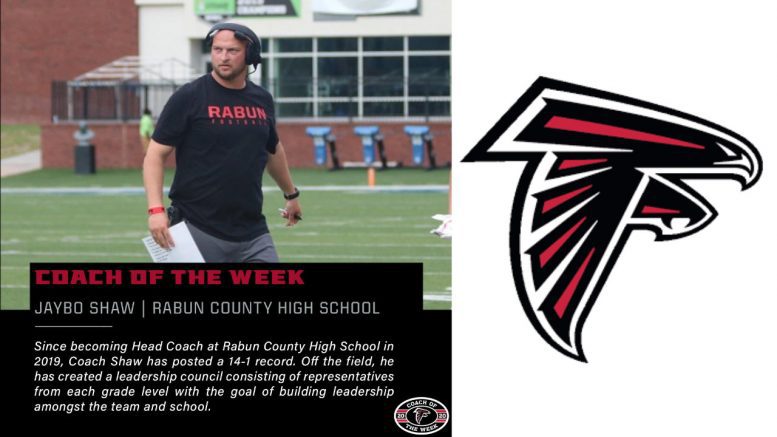 Rabun County (Tiger, Georgia) head coach Jaybo Shaw is the Week 2 winner of the Atlanta Falcons Coach of the Week Award. Shaw is following in his father Lee’s footsteps as the head coach of the Wildcats.

After serving as his father’s offensive coordinator at Rabun County for three years, Jaybo took-over the reigns of the program when his father retired at the end of the 2018 season. After a perfect 10-0 regular season last year, the Wildcats advanced to the AA state quarterfinals before falling to Thomasville.

Jaybo was an all-state high school quarterback playing for his dad at Flowery Branch High School. The Falcons’ headquarters and training facility is located in Flowery Branch, Georgia. In college, the younger Shaw played at Georgia Tech and Georgia Southern.

As part of the Coach of the Week program, the NFL and Atlanta Falcons will recognize head high school varsity football coaches across the state of Georgia for their hard work and dedication to making a difference in student-athletes lives on and off the field. Each winning head coach will receive a $1,000 grant for their football program, a commemorative football and tickets to an Atlanta Falcons home game.