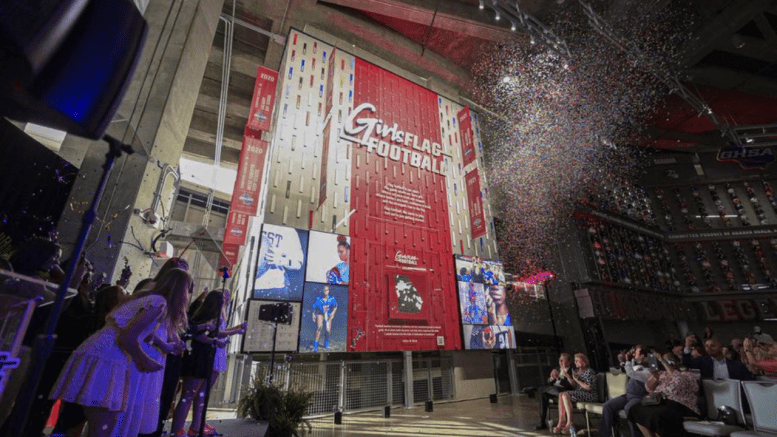 Wednesday night the Atlanta Falcons unveiled a new 30-foot dynamic wall display inside Mercedes-Benz Stadium dedicated to the trailblazers of high school girls flag football in the state of Georgia. The wall was unveiled during a private event that included close to 200 girls flag players and coaches, as well as representatives from the National Football League, the City of Atlanta, Georgia High School Association, the Falcons and Mercedes-Benz Stadium.

We are here… and we are not going anywhere.

To the Trailblazers, this is for you! pic.twitter.com/Bi54jePYYx

“Last night’s celebration of the evolution of high school girls flag football in Georgia was very special,” said Atlanta Falcons CEO and President Rich McKay. “To be able to see what started in one county cover six counties and then an entire state is remarkable. It’s a testament to the coordinated efforts of many. The fact that we can expand the game and give girls the opportunity to play in high school is incredible, because football is the ultimate team sport.”

Over the last six years, the Atlanta Falcons and the Arthur M. Blank Family Foundation have worked to elevate girls flag football to be a sanctioned sport in Georgia in coordination with the Georgia High School Association (GHSA) and local high school athletic directors, coaches and players.

The wall unveiling reception was the culmination of combined efforts with the Georgia High School Association (GHSA) and the Blank Family Foundation, as Georgia became the fourth state to offer girls flag football as an official sanctioned sport in 2020.

Many thanks to all that came, spoke and supported this momentous occasion! 🎉 pic.twitter.com/6N0jiCQHG3

The above story is from the Atlanta Falcons

Follow what the Atlanta Falcons are doing in the community

Now & Then – And then there were four