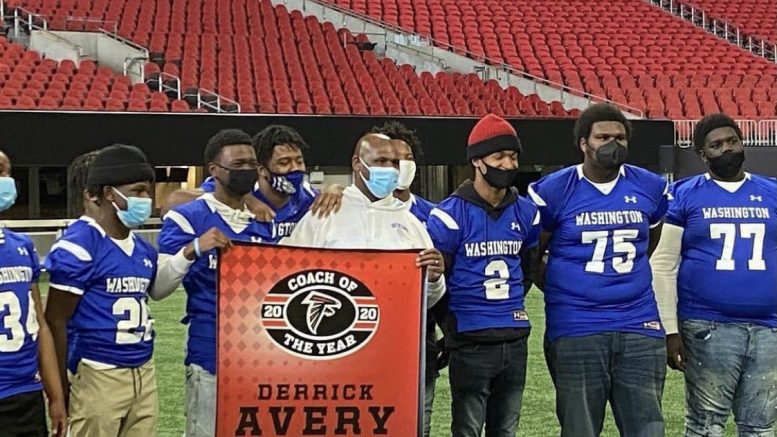 The Atlanta Falcons have named Derrick Avery, head coach at Booker T. Washington, as the team’s 2020 High School Coach of the Year.

According to the Falcons, “In 2020, despite the challenge posed by playing a season in the midst of a pandemic, Avery’s team experienced a four-win improvement over the season prior. The Bulldogs finished with a 7-3 record and returned to the postseason.”

As the Atlanta Falcons 2020 Coach of the Year, Avery will also serve as the organization’s nominee for the Don Shula NFL High School Coach of the Year award, which will be announced this summer. In 2019, Falcons’ nominee Matt Land of Dalton High School named the winner of the Shula award.

The Atlanta Falcons have named Derrick Avery, head coach at Booker T. Washington, as the team’s 2020 High School Coach of the Year.

Below is a story on Coach Avery from Falcons Football Communications Coordinator John Deighton on AtlantaFalcons.com.

Educating & Empowering, how an Atlanta high school coach is changing lives on and off the field

At 5 a.m., Head Coach Derrick Avery arrives on the grounds at Booker T. Washington High School on Atlanta’s Westside to open the gates and ensure the students who need to arrive to school early can do so.

By 8 a.m., Avery reports for bus duty, wishing students a good morning and welcoming them to school with a loud and friendly voice.

At lunchtime, Avery can often be found sharing a table with his players and students making sure they are keeping up with their schoolwork, managing their schedules and helping their families at home.

Following football practice at the end of the day, it’s not uncommon to see Avery providing his players with a ride home or public transportation cards.

In addition to being a football coach, Avery is a mentor and father figure for his athletes and his community, putting the interests of others above himself.

For his consistent work and tireless dedication to improving the lives of his players as those around him, Derrick Avery has been named the 2020 Atlanta Falcons Coach of the Year.

After serving as the head coach at a local middle school for a few seasons, Avery returned to Booker T. Washington High School in 2012 to coach the offensive line. Two years later, he was named the team’s head coach.

In 2020, despite the challenge posed by playing a season in the midst of a pandemic, Avery’s team experienced a four-win improvement over the season prior. The Bulldogs finished with a 7-3 record and returned to the postseason.

Off the field, Avery always looks for ways to help his athletes make a difference in the community. This past fall, Avery partnered with the Atlanta Falcons player-led Social Justice Committee on an initiative to educate his athletes on the importance of voting and fulfilling their civic duties.

One of the main priorities of the Falcons Social Justice Committee this past year was to educate local high school football teams about how they can make a difference in their communities and volunteer as poll workers on Election Day. When the committee reached out to local high schools, Avery was the first to get his team involved in the initiative.

Last summer, Avery ended practice early one day and called a team meeting where his players were surprised to be virtually joined by members of the Falcons Social Justice Committee. During the meeting, the players spoke on the importance of voting and encouraged the team to work the polls in November.

Throughout the following weeks, Avery continued the conversation on voter education and participation, and made the initiative a top priority across all sports at Booker T. Washington High School.

Avery ensured that all of his players, not just the eligible group working the polls, took part in various social justice conversations and voter education calls. Those who were eligible to volunteer, along with their head coach, spent time learning voting rules and regulations, watching educational videos and speaking with local legislators. On Election Day, eligible Booker T. Washington players volunteered at polling precincts throughout metro-Atlanta.

“I wanted to get involved because I realize how important it is to actually vote, and it starts with the youth,” outside linebacker Isaiah Waller said.

Booker T. Washington’s participation in the voting process and conversations around social justice were spotlighted throughout the fall, including in the New York Times.

“Coach Derrick Avery has been a blessing,” Offensive Coordinator Chauncey Prather said. “He always says, ‘You’re here for a reason.’ He’s been pouring into me as a mentor and making me a better father, friend and coach. By him trusting in me and seeing my vision, he has helped me to become a better man, coach and father to my kids.”