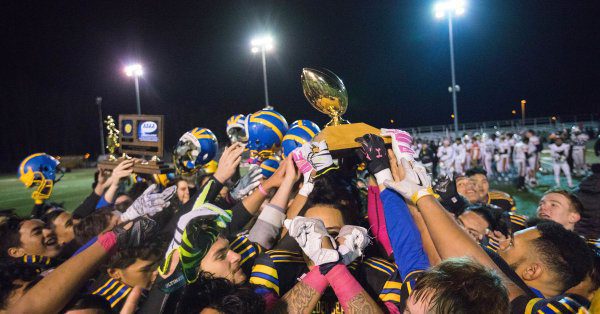 Bartlett (8-3) beat West (6-5) 40-33 Saturday to win the Alaska Division I state championship. Bartlett running back Hunter Cargill scored from 6-yards out for the game-winning touchdown with just :12 second left.

Does it get any better than a GAME WINNER?! HUNTER CARGILL Have fun remembering this one for awhile! @hunteracargill pic.twitter.com/nRNvQxlw4b

The Golden Bears used a solid ground game with Jontay Edwards carrying the ball 46 times for 254 yards and two touchdowns and Cargill rushing for three touchdowns, including the game-winner, with 183 yards on 27 carries.

It’s Bartlett’s first state title since 2009. West, which has won three titles since 2010, was playing in its fifth straight state title game.

Related: Division III title game comes down to the end