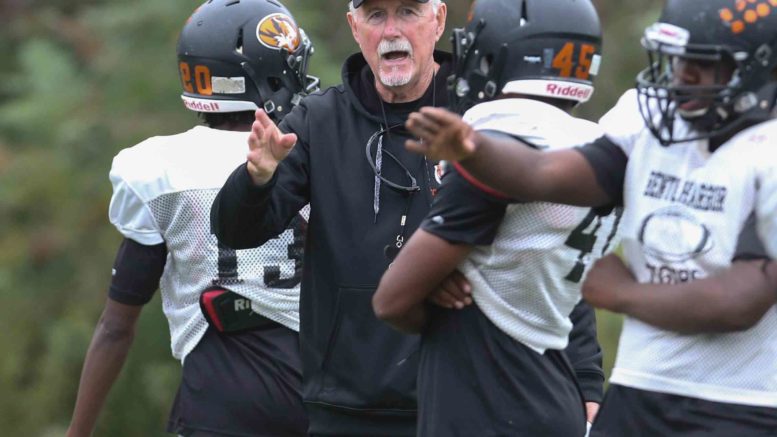 BENTON HARBOR – Elliot Uzelac and his wife, Wendy, were driving to visit grandkids in Alabama a few months ago when Wendy offered an observation.

Uzelac nodded his head. “Yeah, a little bit,” he said.

How could he not be bored?

Uzelac began coaching football in 1964 and had been the head coach at Western Michigan and Navy. He was also an assistant at Michigan (twice) and Ohio State, among several stops along the way, before retiring four years ago.

After reviving the nearby St. Joseph high school program, Uzelac, 74, found himself with nothing to do.

“Why don’t you coach?” Wendy asked.

Uzelac had a surprising response.

“I want to do something better than that,” he said.

Wendy’s comeback was even more of a shock.

“Then go to Benton Harbor,” she said. “You go there. You help them. We’ve loved these eight years here, and you know and I know that those kids need help on the field, off the field and in the classroom. Maybe you can do that.”

Uzelac was so stunned by the suggestion that he darn near drove the car off the highway and into a ditch.

Benton Harbor is a once-dynamic community that had tremendous success in athletics — and now is one of the most desolate communities in the state.

Over the last 30 years enrollment has dropped from more than 1,700 students to around 600, and the drop in football has been even more dramatic.

The Tigers entered this season riding a 19-game losing streak and hadn’t had a winning season since 1989.

And Wendy wanted her 74-year-old husband to take over this program and teach them how to win?

Actually, she wanted him to do more than that.

Uzelac couldn’t wait to apply, and on July 21, five days after Fred Smith was hired as the school’s athletic director, Smith hired Uzelac to be the head coach.

The results have been nothing short of astonishing. With a roster of only 34 players, Benton Harbor heads into tonight’s home game against Stevensville Lakeshore with a 3-3 record, equaling the Tigers’ victory total for the last six seasons combined.

But the least impressive thing Uzelac has done is help the Tigers win three games.

If anything, Uzelac was surprised by the receptive response he received from the players, who were tired of losing. He had no idea these players would know who he was — and 30 years ago they wouldn’t have known him, because 30 years ago there wasn’t the Internet.

“I didn’t really know him,” said junior running back/defensive back Percy Brown. “I was like, ‘Coach Uzelac? Who is he?’ They told me he was the old St. Joe coach. I didn’t know him, so I Googled him. I found his history. I said, ‘OK, we’re going to go somewhere.’ “

The tone for the program was set the first time Uzelac met with his players.

“We had a meeting, and the way he talked to us, he told all of the adults to get out, he just wanted to talk to us,” Brown said. “He said what he expected and what he wanted.”

These players had heard a lot of talk from previous coaches who ran the program, but they instantly noticed something different about Uzelac.

“It was not only his word, but the tone,” Kirkland said. “It was like he was dead serious. He seemed promising.”

It didn’t take long to learn how promising Uzelac would be. Instantly, little things surrounding the program began to change.

Uzelac has painted and carpeted a room he uses for the coaches’ office. Carpeting and paint have been added to a team meeting room. The joke of a weight room is being transformed, and so is the locker room.

“We never had the air on in here, and the next day we came in here and felt a little breeze,” Brown said. “We were like, ‘What’s that?’ They were working on the air.”

Air conditioning was nice, but for years the players couldn’t drink the water on the practice field.

“The water was contaminated outside,” Brown said. “He made a demand, and it was fixed the next day.”

Uzelac was just beginning. Much to the surprise of the players, food began showing up for them — and not just on game day. All of it was donated by people and businesses in the community.

“We ate good,” Brown said. “During two-a-days, before our sixth hour, at camp, before games, after a game, on Saturdays.”

When he took over, Uzelac found players with high blood pressure, asthma and stomach disorders. He was certain that many of his players came to school hungry, and he wasn’t sure what they ate when they got home after practice.

With his wife calling the shots, the meals are nutritious, heavy on chicken and pasta, nothing fried.

“We feed them as much as we can — morning, noon and night,” he said. “My wife says it gives us a chance. And my wife is pitching in. She’s there for every meal. We’re together on this. These are really good kids, but they’ve got nothing. I mean, worse than I thought. Just so many bad things have happened to them.”

Besides being the football coach, Uzelac has been a fundraiser. He is asking seemingly everyone he knows for donations to pay for everything he needs for the program, and people have responded positively.

“I’ve been raising a lot of money,” Uzelac said. “It’s amazing. A lot of people have given a lot of money already. I’ve got checks coming in from players who played for me at Western, at Michigan. I guess the word got out.”

When practice began, the players quickly learned that Uzelac knows a thing or two about football.

“We believed in him when we started practicing. I know I did,” said junior running back/defensive back Jeremy Burrell. “It was everything he did. He made sure our stomachs were full. He made sure we practiced hard.”

And most of all, he preached perfect practice. The players learned that even the smallest detail matters.

It took a while for the message of perfection to reach home. The first few practices resembled a Keystone Cops routine. Players had no idea how to line up in a proper stance. When Uzelac talked about reading their keys, the players thought he was talking about their house keys.

The Tigers run the veer offense, the same offense they ran a year ago. But now junior quarterback Tim Bell has a better understanding of when he should hand off and when he should keep the ball.

“He got me to read better,” Bell said. “If my D-end — my read man — turns his shoulder, that means I have to pull it. If he just stands there, I have to give it.”

After losing the opening game, 20-13 to Gull Lake, Benton Harbor won for the first time since the opening game of the 2011 season by defeating Battle Creek Central, 14-9. The next week the Tigers thumped Niles, 35-13.

The players knew they were improving, but to actually win a game proved to be an overwhelming experience.

“It was joy,” said Bell. “I almost cried. Words couldn’t explain how I felt.”

By the opening game, Brown knew things were different, and he knew winning games was just a matter of time.

“You know how your head goes down when you lose a game?” Brown asked. “My head was still high when we lost the first game. It was close, it was our first game and we didn’t play like we knew each other. We kept our head up, and the next game we won, and the next one, back-to-back.”

The turnaround in the football program can be seen in the hallways of the school. There is a buzz about the football team, and school life just seems a little better than before.

The players laughed when asked how Uzelac is at practice.

Alexander said he and Bell seem to get the brunt of Uzelac’s daily criticism, but he also said that they both realize Uzelac is not attacking them personally.

“Every day at practice we’re the most yelled at people,” Alexander said, rolling his eyes. “It just makes you better. He just wants you to be better. Look where it brought us.”

But this is just the beginning for Uzelac. He has plans that go way beyond the football field or the weight room.

“We’ve got to do a better job academically,” he said. “We’ve got some kids who are talented and can go to school and play, but we have to get their grades to where they should be and we have to get their test scores up. That’s a big job, so we have the room and we have six tutors that are going to come in four nights a week year-round and that will help them. We need to help them bad.”

Uzelac isn’t turning Benton Harbor’s facilities into the Taj Mahal. He just wants a nice locker room, meeting room and weight room so the players can feel at home, because he knows for many of them, school is the best part of their day.

“If I can control the environment once they get here, it will help these kids,” he said. “I want them to look forward to coming to school and going to class and being a part of a football program.”

That is why he is spending so much time playing fundraiser.

“I’ve got to raise $50,000 for the weight room,” he said. “I’ll get it done. The kids are worth it. I want them to feel that they’re relevant, that they have some importance in their lives.”

To donate to the Benton Harbor football program, contact coach Elliot Uzelac or athletic director Fred Smith at 269-605-1240. Contributions can also be mailed to Uzelac at the school: 636 Pipestone Rd., Benton Harbor, MI 49022.