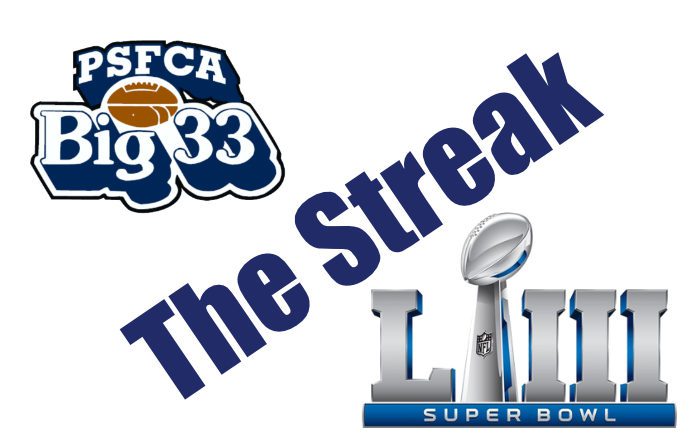 I say it every year…I LOVE writing this story!

There’s NEVER been a Super Bowl without a former Big 33 player on one of the team’s rosters. Hoyer and Johnson’s presence in Atlanta means it’s 53 straight for this incredible all-star game that’s been Who’s Who of high school football.

For those of you not familiar with the Big 33, it’s an all-star high school football game played in Pennsylvania since 1958.  Over the years, Pennsylvania all-stars have squared-off against all-star teams from Maryland, Ohio and Texas. On other occasions, Pennsylvania has faced an all-USA team.

Below is video from Hoyer, who played at Cleveland’s St. Ignatius (Ohio) in the 2004 Big 33 game, which is now run by the Pennsylvania Scholastic Football Coaches Association.

Johnson played for the Maryland All-Stars in the 2013 Big 33 Classic. Rams defensive end Aaron Donald, who played at Penn Hills (Pennsylvania), was selected for the 2010 game, but did not play in the contest.

The streak started when Pro Football Hall of Fame defensive back Herb Adderley played for the Green Bay Packers in Super Bowl I.  Adderley was a Big 33’er from Northeast High School in Philadelphia.  Adderley was a great three-sport athlete in high school, having been named All-City in football, baseball and basketball.