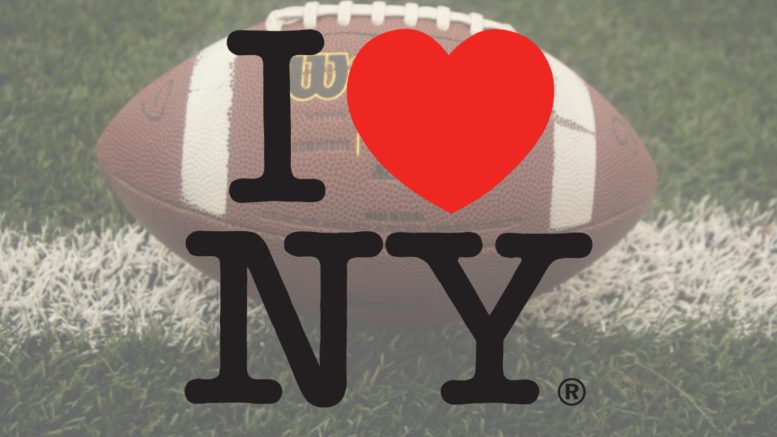 Tonight, Coach will be at the Public School Athletic League (PSAL) showdown between South Shore, ranked No. 4 in the High School Football America New York City Top 10, and No. 4 Tottenville. In Coach DeCristoforo’s NYC Opinion Poll, the two teams are the opposite of our algorithm rankings.

Both teams are 4-0, although one of Tottenville’s victories was a forfeit.

Saturday afternoon, Coach will check-out his former team St. Peter’s taking on Xavier. St. Peter’s 2-2 overall with a 1-2 record the AA West Division in the Catholic High School Football League of Metropolitan New York. Xavier in the AA East Division is 2-2 overall and 2-1 in league play.

Then Saturday night at Monsignor Farrell, Coach DiCristoforo will be reporting on the showdown between the No. 2 and No. 3 teams in our statewide poll as the Farrell Lions collide with Iona Prep, currently No. 2 in the state. Both teams enter the game undefeated with Farrell coming-off a 26-24 win over Cardinal Hayes. Iona is coming off its bye week.

Iona’s offense has been putting up over 43 points per game, but the defense is allowing 38.7 per contest. Gaels QB Derek Robertson has completed 69 of 109 passes for 941 yards with 11 touchdowns and three interceptions.

Farrell running back Vin Farrell has been a workhorse with 66 carries in four games for 564 yards, which breaks out to an average of 8.5 yards per carry. Quarterback Mike Regan has thrown for 552 yards with eight TD’s.  He’s also rushed for 216 yards and a score.

There’s a NEW No. 1 in Coach Mark DeCristoforo’s NYC Top 5, plus dreams of a Metro Bowl