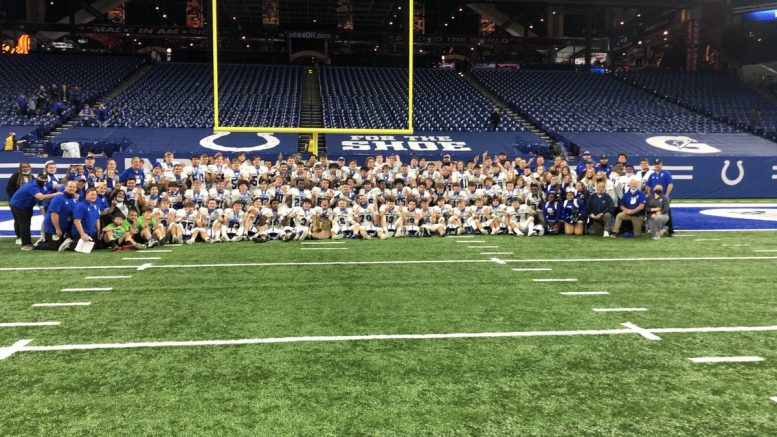 Bishop Chatard extended its state record number of high school football championships to 15th with a 41-14 defeat of Danville in the Indiana Class 3A title game. The Trojans entered the game ranked No. 7 in the High School Football America Indiana Top 10.

The following recap is from the IHSAA.org.

The most-successful program in state history added to its cache of championship trophies as Chatard rolled to a 42-14 win over Danville in the Class 3A title game.

Using a balanced offense and a smothering defense, coach Rob Doyle’s Trojans claimed the school’s 15th state championship – two more than anyone else – in their 16th appearance all-time. The appearance total matches three other schools for the best in state history.

Running back Tommy Hannon rushed for three touchdowns and 112 yards, while quarterback Carter St. John had an efficient day, completing 16-of-19 passes for 174 yards and three touchdowns. Both players were replaced in the fourth quarter.

Sheesh! Thomas Coleman scores his second touchdown of the game as Bishop Chatard adds to their lead.

The Chatard defense, meanwhile, was equally impressive as it held Danville to 199 yards and only one score before a late Warriors score.

The Trojans finish 13-1, losing only to Indianapolis Cathedral — which will play for its 12th state title in the 5A contest.

Coach Jayme Comer’s Warriors, who were making their second appearance in the state finals and first since 1999, suffered their first loss in 12 starts. Quarterback Kale Payne completed a 36-yard TD pass to Luke Wooten in the second quarter before junior running back Matt McGovern scored on an 8-yard run in the fourth quarter.

Bishop Chatard's Rob Doyle on winning back-to-back titles: "We all went through a lot this year and we all stuck together, whether we were in the building or not. I'm truly thankful for the opportunity."

Class 3A State Championship Records
None

Congratulations to Kyle Haslett of ⁦@BCHSAthletics⁩, this year’s recipient of the Blake Ress Mental Attitude Award in Class 3A Football and presented by the Indianapolis ⁦@Colts⁩! pic.twitter.com/j49rSAOXvF

He is the son of Crystal and Jay Haslett of Indianapolis. He is undecided on where he will attend college but plans on studying Engineering and Political Science.