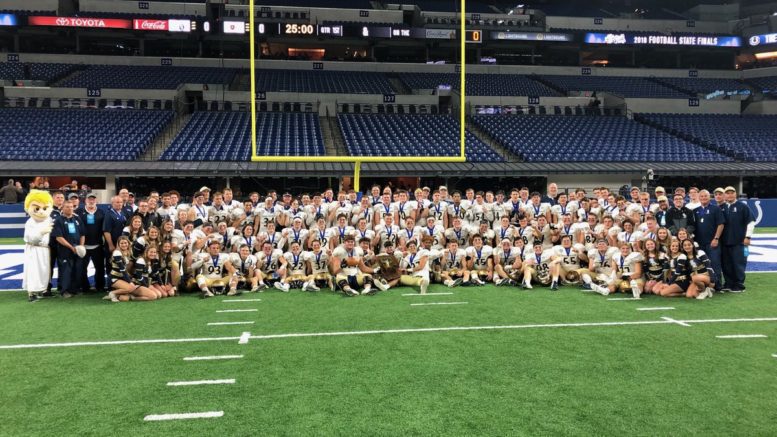 Fort Wayne Dwenger’s T.J. Tippmann scored on a 9-yard run in the fourth overtime to give the Saints a 16-10 victory over Evansville Central in the Class 4A championship game.

The titanic defensive struggle finally ended when Tippmann took a handoff from quarterback Brenden Lytle, slipped off the left side and hit the pylon for the winning score. The victory for the Saints (14-1) gave them their fifth state title, while coach Jason Garrett became only the third first-year head coach to win a state championship.

In the previous 45 years of the IHSAA State Finals, never had a championship game reached overtime in a scoreless tie and never had a title game been decided after the second overtime.

The teams slogged through four quarters, each having scoring opportunities, but penalties (120 yards for Dwenger, 62 for Central) and dropped passes plagued both teams. Central (13-2) had the final chance to score, but kicker Jon Degenhart’s 39-yard field goal was blocked with :01 left.

Both teams missed field goal attempts in the first overtime before both converted kicks in overtime No. 2. In the third overtime, Tippmann scored on a 1-yard run to put the Saints up, 10-3, but Central came right back and tied it on an 8-yard pass from Brennon Harper to Malcolm DePriest.

In the fourth OT, Dwenger’s Charlie Howe intercepted Harper to end Central’s drive before Tippmann finished the game on second down.
Central, under coach Troy Burgess, was making its first-ever state finals appearance.

T.J. is a captain for the Saints’ football team this season and leads his team in tackles (86), tackles for a loss (13), forced fumbles (4), and ranks second in sacks (9). On offense, he has contributed 7 rushing TDs this season. He was voted All-Conference First Team for 2018 and was recipient of the Eric Wedge Leadership Award in 2018. He was also awarded Dwenger’s 100% Award for 2017. T.J. is also an All-State Track and Field member and a captain of Dwenger’s Track and Field team.

T.J. is heavily involved in many facets of life. He has excelled in the classroom, earning himself a 4.5 GPA to this point. He is a member of Dwenger’s National Honor Society and is currently the President of Dwenger’s Student Council. T.J. is the recipient of the Mother Teresa Service Award for 2016, 2017, and 2018. He has been Dwenger’s High School Ambassador for 2016, 2017, and 2018. He has been named a Bishop Dwenger Scholar in 2016, 2017, and 2018 and the recipient of the American Citizen Award for 2017 and 2018. T.J. was also given the Good Samaritan Award in 2017. He spends time volunteering at the Franciscan Health Center, with Habitat for Humanity, and at the Vincent House. He was also a member of the St. Jude Catholic Church Action Committee. T.J. has been an outstanding member of his community and strong leader for the Bishop Dwenger Football Team.

He is the son of William McGarry and Teeara Carr. Upon graduation, he will attend Columbia University to study Biochemistry.

Each year the IHSAA Executive Committee selects a senior player who was nominated by his principal and coach and was determined to have best demonstrated mental attitude, scholarship, leadership, and athletic ability. The award is named in honor of the IHSAA’s third commissioner from 1962-76.

The Indianapolis Colts presented a $1,000 scholarship to Fort Wayne Bishop Dwenger High School in the name of Tavehon (T.J.) McGarry. The Colts have been the presenting sponsor of the entire football state tournament since 2009 and are sponsoring the Phil N. Eskew Mental Attitude Award.