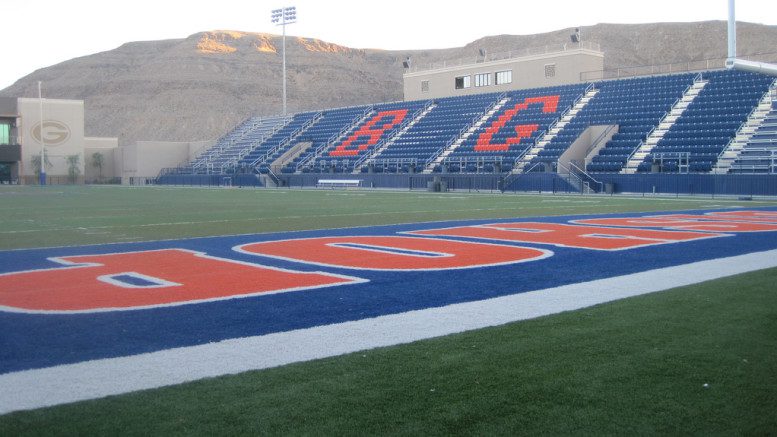 Biaggio Ali Walsh dedicated his senior season to the memory of his grandfather, Muhammad Ali. He opened with a fitting tribute to “The Greatest.”

Ali Walsh, the reigning ALL-USA Nevada Player of the Year, again showed he’s a star with three touchdowns, including runs of 54 and 77 yards, to lead No. 3 Bishop Gorman (Las Vegas) to a 44-14 victory against No. 5 Cedar Hill (Texas) on Saturday in the GEICO ESPN High School Kickoff.

Ali Walsh, a Cal commit, finished with 198 yards on 18 carries, an average of more than 11 yards per carry before leaving the game with a tweaked ankle after the outcome was decided.

The win was the 40th consecutive for Gorman, the two-time defending Super 25 champion. With losses by No. 1 St. Thomas Aquinas (Fort Lauderdale) and No. 2 Grayson (Loganville, Ga.) will be among the teams in consideration for the top spot when the new Super 25 rankings come out Monday.

MORE: No. 4 IMG Academy downs No.2 Grayson behind Kellen Mond

Given the high interest in the game, an additional 2,500 seats were added and the fire marshall turned away other fans, according to the ESPN broadcast team.

The game featured its fair share of penalties and chippy play as the sides have been exchanging trash talk since the spring that only intensified in the days leading up to the game.

Some of that trash talk centered around Gorman quarterback Tate Martell, an Ohio State commit who finished off Cedar Hill with three rushing touchdowns in the second half. Martell had runs of 13, 34 and 49 yards as Gorman opened up a 44-14 lead.

Gorman led 17-7 at halftime but Cedar Hill tightened the gap to 17-14 on a 72-yard run off a fake punt by Marquise Foreman. Foreman, who had one yard rushing to that point in the game, but made at least six player miss on his way to the end zone.

After a Gorman interception, Martell scored less than a minute later for a 30-14 lead and the game was essentially over.

Gorman scored on its next four possessions after Cedar Hill to within 17-14.

Cedar Hill QB Avery Davis, a Notre Dame commit, was 19 of 33 for 158 yards with a touchdown and two interceptions.