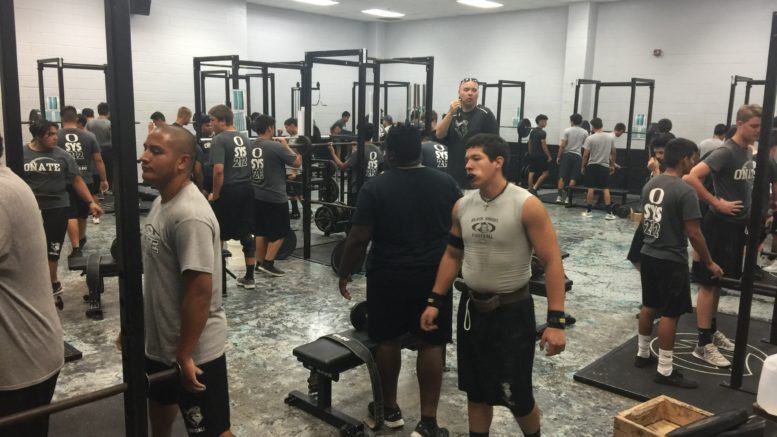 Hello everyone, it’s good to be back writing again. It has been about four months since I have submitted a blog to High School Football America.  It’s funny because when I committed to this, I thought it would be tough to write during the season and easy during the off-season. Boy was I wrong. Since this was our first full off-season here at Oñate High School, it was imperative to get it right and set the tone for years to come. We are now close to the midway point of Phase IV: Summer Workouts. Our Phase II Boot Camp was exceptional and our Phase III Spring Football was productive and focused. We’ve gotten better. Now it’s time to for that to translate to the Fall. Today I want to discuss that thing that drives most of us high school coaches crazy…Summer Workout attendance.

I want to start off by pointing out that our daily attendance is good. We have approximately 140 players in our program and we are averaging roughly 115 daily. Ours is football only. We do not have all sports, all grades, summer workouts like other schools have. Once again, the attendance percentage is good, but not as good as I would like it to be.

Now I completely understand that no team is going to get 100% attendance across the board from every player. Life happens and families take vacations, people get sick, kids have to work to help their families, and of course some did not take care of their school work from August to May so they have summer school. But, what I do expect from our young men is putting our program near the top of that priority list.

I try my best to accommodate kids that have jobs but like I tell them, you have the rest of your life to work, you only have four years to play tackle football. Plus our workouts are from 9am-11am.  There are thousands of jobs a teenager can get that start at noon. Like I always say to my players, football must be a way of life, not a hobby. If it is just something to pass the time, then I’m the wrong guy to play for. I am not the average head coach. I am very meticulous when it comes to a lot of little things. I keep detailed attendance records, I do daily attendance averages, and I do weekly individual player attendance percentages.

I will not punish a player or hold it against them for missing summer workouts, even if I wanted to we are not allowed. Remember, we are in a child-first-accountability-last type of society. I will point out to them, however that it will be extremely hard for them to play much in the Fall because five other kids at their position got so much stronger and better over these two months. Some kids will tell me, “Coach, I can’t make it all week, but I’m working out on my own and going to the local gym.” My response: Well that’s like telling me during the season, “I can’t make practice Monday-Thursday, but my Mom is throwing me passes in the backyard and we watch film after dinner, so I’ll be ready for the game on Friday.” That will not fly with us

I like to use an analogy with my players and their parents that I think hits home. I call it “The Story of Bob, Joe, and the CEO.” A CEO of a huge corporation tells Bob and Joe that he is going to choose one of them to manage his company in August. Both men are very good, so the CEO tells them that their performance in June and July will dictate his decision. In June, Bob’s wife gets the flu, his kid has a baseball tournament that he must attend, and he planned a two week June family vacation to Hawaii way back in January and he cannot get his money refunded. He works hard and does a good job in July but June was all but wasted. It was out of his control, right? He could not help his circumstances. Now Joe on the other hand never missed a day all summer and does some exceptional work week in and week out. He is on a mission to prove that he is ready for this promotion. August comes around, and to no one’s surprise, the CEO chooses Joe for the position. Bob is unhappy of course because as he claims “my absences could not be helped; it was not my fault.” The CEO is not punishing Bob, he is not firing him or demoting him. He simply choose Joe because Joe was more prepared. Most players and parents get the moral of the story, amazingly some do not.

Attendance is the cornerstone of life. Show up to class. Show up to practice. Show up to summer workouts, show up and work. REMEMBER THIS: SUMMER WORKOUTS ARE NOT MANDATORY, BUT NEITHER IS PLAYING TIME.

RECOMMENDED BOOK OF THE WEEK: Pete Carroll’s “Win Forever” is a literary embodiment of his coaching style and personality. As you are reading it, you can almost hear Coach Carroll’s infectious, motivating style at work. It is a great story of overcoming hurdles and disappointments, as he goes from being fired from the New York Jets and the New England Patriots to rebuilding a dynasty with the USC Trojans and winning the first Super Bowl title in Seattle Seahawk history. Some may think “culture” is not as important in the NFL as it is at the collegiate and high school level, but Carroll dispels that myth. He does not want his teams to be best at doing something, he wants them to be the only ones doing it. Great read for any coach at any level, especially beneficial for head coaches.

The Land of Enchantment, but not QB recruits?

La Cueva moves to No. 1 in the New Mexico Top 5