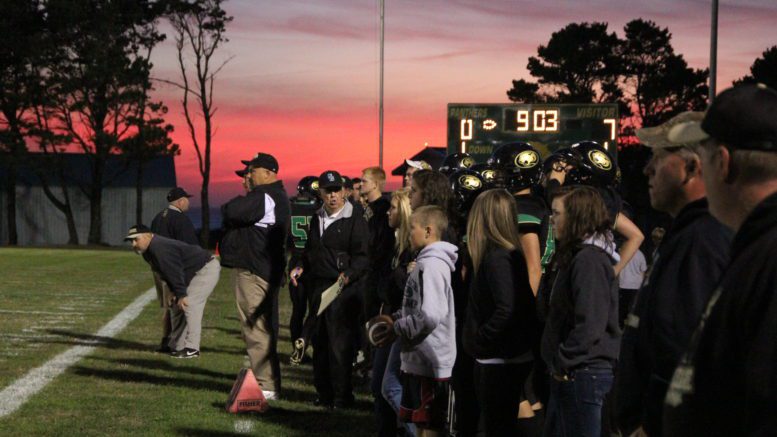 As the creator of High School Football America, I’ve met thousands of high school football coaches, who put their student-athletes ahead of many things, including their own families.

Over the weekend, Kevin Swift, the head coach at Gold Beach High School in Oregon, asked me if he could write a blog for us about about how close his program came to “shutting it down” for 2019.

Below are his words and thoughts on the sport he loves to coach.

Sometime in the last two weeks, we all have read or heard of a high school losing its football program for a variety of reasons, but primarily for lack of numbers. It’s a national trend — participation in football is falling at a rate similar to the stock market, lately.

If you’re a football coach, it probably feels like the national and regional media celebrates each one of these losses.

Football is under attack in this country, despite all the REAL benefits it brings to the young people who play the game. Whether it’s the CTE-scare tactics, which are unproven, or incomplete science or the toxic masculinity claims, it feels like there’s a national movement to extinguish the game from our culture. As a lifelong coach, who was raised by a father who coached high school for 52 years, it’s devastating!

In my opinion, being a strong male warrior, who practices chivalry, is not cool anymore. Yikes, this is not going to be a plus for our culture — in my humble opinion.

Gold Beach, a small coastal former logging town in the middle of the Siskiyou, started playing football in 1956 in the state of Oregon. It’s small rural football team with a stadium with a west end zone that overlooks the Pacific Ocean. The east end zone is in shadows of one of North America’s last temperate rainforests. It’s a breathtaking view and experience.

My Panthers do not play a national schedule and will never make anyone’s Top 100 — or — Top 1000 for that matter and is not a D1 factory for college football. Gold Beach is a school of about 150 kids that typically has 30-to-40 young men playing football, in a town that proclaims itself as a football town with a fishing problem.

From a historical standpoint, in 2011, Gold Beach won its third state title and second title in five years! In 2018, the Panthers struggled on the field with a 1-7 record with a roster of twenty-four kids. For me, it was time to roll-up my sleeves and get to WORK making the Panthers a factor again in the small school football circles of Oregon.

Fast forward to early 2019, I knew something was amiss during our off-season. Our turnout for our Zero-Period weightlifting class (a graded class) had shrunk from its typical number of 25-to-30 kids to just ten. I heard rumors of kids choosing not to play.

In a small school, it’s easy for coaches to find out the facts, rather than trying to decipher the rumors like — “Coach, I just do not want to commit to football because it takes up so much time,” or “I need to work all summer, so I have no time to work out, and it just takes too much effort to be good.”

Not one kid told me they were not playing because of safety concerns or that toxic masculinity had infected them. What it really came down to was they did not want to work that hard at something or deal with the possible adversity that the game inevitable brings to everyone who plays it.

My comment to those players was always the same, “What do you think marriage, a career or life as an adult will be?”

Our downward numbers trend continued during our summer workouts. Typically, 20-to-25 kids attend our workouts, but this summer, we averaged only four!

Another troubling sign was the general unconcerned attitude I got when expressing my concerns to the administration, fellow educators and community leaders. Nevertheless, I stayed to the course!

On the first day of mandatory fall practices for Oregon on August 19th, we had only 15 kids show up. Only three of them were three linemen-type kids.

I told the team I was going to call the OSAA (Oregon Schools Activities Association) and get some kind of direction. Needless to say, my administration, fellow educators and community members were in full panic mode with statements like — “What do you mean we may not have a team?”

A local reporter finally asked for an interview to get the scoop. I told him it was a perfect storm with a lack of good adult decisions concerning the program; declining enrollment as Gold Beach becomes an expensive retirement community for Californian expatriates; a shrinking middle class within the community; and that kids were still “good kids,” but looking for the path of least resistance, in life.

I said it would be difficult, because most school schedules were set in the spring. That meant we might lose the season and maybe the program. I was pretty down. I was preparing for the worst and had to share the news with the school board at Wednesday night’s (August 21st) scheduled board meeting.

Tuesday Night, while we were all asleep, the Football Gods went to work! It is the only explanation I can come up with for what happen at Wednesday’s practice. That’s when twenty-four kids showed-up with four-to-five linemen-type kids!

The Panther Football program had been saved!

While we did not do anything as a team all summer to ensure some success for the upcoming season, we have football! While I give credit to the Football Gods, our program was saved by a nucleus of about four-to-six kids who would not stop talking it up to their classmates and to community members, who woke up in time to do the same thing.

Also, some of the credit goes to my father was is now 84-years old. He is the one who taught me to never give up or quit on anything in life. I never quit on this program and at the end of the day, the program did not quit on me!

I know the reality is that this is going to become a yearly struggle. To keep the program going, my staff and I will have to work on keeping the kids buying into the process.

The great news is that, while we may not be competitive this year, we have a team for 2019! I will be able to mentor young people on life lessons while using my passion for football to do it!

Life is good for now! But, like the tree that falls in the forest and no one notices, the media will not notice this save of a program. Instead, the media will continue to push its agenda that football is and should be dead in this country. However, not in Gold Beach this year! Because, like Luke Bryan says — “I believe most Friday nights look better under neon or stadium lights.”