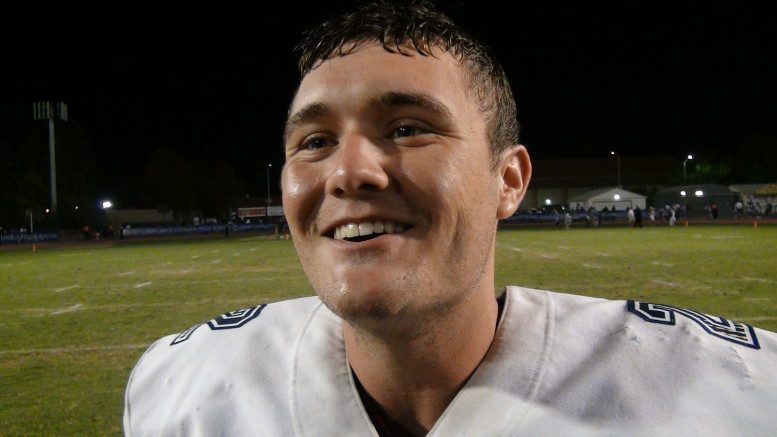 For those familiar with Trinity League play, you know championships aren’t won in Week 1.  You also know that with each game having a championship feel, you can’t stumble in Week 1 either.

Friday night, nationally-ranked St. John Bosco, #5 in the latest High School Football America National Top 25, and #13 Mater Dei prepared for their showdown against each other next week in different fashion.

Mater Dei (6-0, 1-0 Trinity League) had all it could handle with Orange Lutheran (3-3, 0-1 Trinity League), which played one of the toughest non-league schedules in America. All three of the Lancers losses have been to nationally-ranked California teams — #3 Corona Centennial, #11 De La Salle and #13 Mater Dei.

OLu led the Monarchs 21-14 at the half behind quarterback L.J. Northington, who threw for 281 yards and two touchdowns on the night.  Mater Dei freshman quarterback J.T. Daniels had another huge game with 454 yards and four touchdowns, plus he ran for the game clinching TD with 1:38 to go.

The Monarchs finished the night with 646 yards in total offense, according to OCVarsity.com.

The surprise of the night was Servite‘s (3-3, 1-o Trinity League) come-from-behind 39-38 win over previously undefeated JSerra (5-1, 0-1 Trinity League).  The Friars pulled it out with six seconds remaining when back-up QB Aaron Simpson scrambled for a 22-yard touchdown run and then tossed connected with Ryan Melvin on the two-point conversion for the win.

Simpson’s heroics occurred after JSerra took a 38-31 lead with :35 seconds to play. Simpson, who passed for 215 yards and two scores, then marched Servite 80 yards in the final 35 seconds for the winning score.