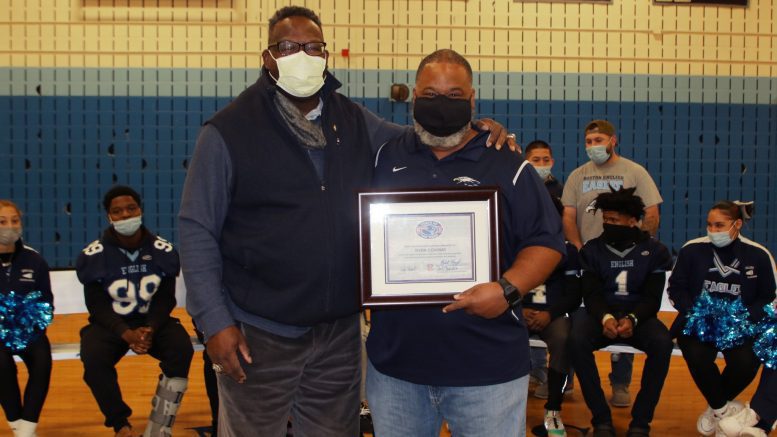 Photo from the New England Patriots

Coming off a thrilling 66-42 victory over archrival Boston Latin on Thanksgiving Day, Boston English High School’s Ryan Conway has been named the eleventh New England Patriots High School Coach of the Week of the 2021 season.

Coach Conway, currently in his seventh season with the Boston English football program as a coach and former player, guided his team to their first victory over Boston Latin since 2013 in a Thanksgiving showdown at Harvard Stadium. The English were fueled by senior running backs Keesean Kerr (12 carries, 128 yards, 3 TD’s) Terrell Gethers (10 carries, yards, 2 TD’s) and Jamari Howard (6 carries, 104 yards, 1 TD).

Thursday’s Thanksgiving matchup was an offensive frenzy with 108 combined points, marking the highest-scoring contest in the 134-year series. Boston English and Boston Latin hold the record for the oldest, continuous public high school football rivalry in the United States.

Patriots, College, and Pro Football Hall of Fame linebacker Andre Tippett, now the team’s Executive Director of Community Affairs, met with the Boston English captains and coaching staff Tuesday morning to present the football program with a $1,000 donation on behalf of the Patriots Foundation in honor of Coach Conway. The visit and check presentation will be featured on the Patriots weekly television show, “Patriots All Access,” which airs on Friday night at 7 p.m. on WBZ-TV in Boston and will be available immediately after on Patriots.com.

“Coach Conway had his team ready to go from the opening kickoff,” said Tippett. “This rivalry dates all the way back to 1887, and Boston English’s victory last Thursday was one of the most significant in program history. Coach Conway is more than deserving of this week’s New England Patriots Coach of the Week honor.”