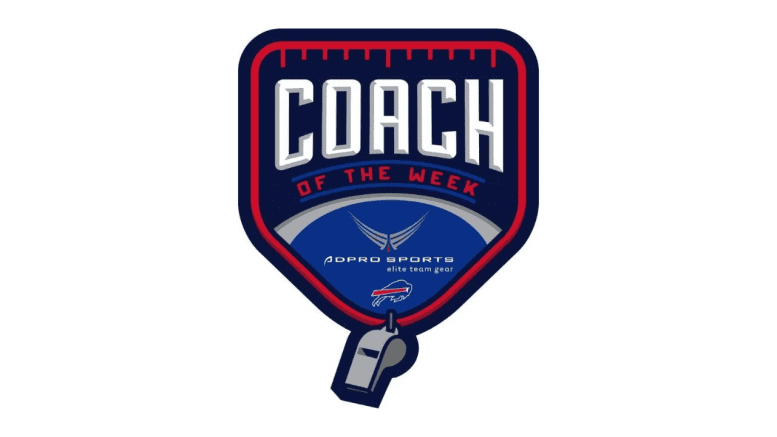 The following is from the Buffalo Bills

The Buffalo Bills and ADPRO Sports are proud to once again partner to recognize some of the best coaches that Western New York has to offer through the 2021 High School Football Coach of the Week Program.

The Bills and ADPRO Sports will be awarding varsity head coaches with the Coach of the Week Award to highlight not only their team’s achievements on the field, but also some of the work they are doing off the field in their communities. We will announce winners from the Buffalo and Rochester Regions over the course of 11 weeks, with both regions Coach of the Year being named at halftime of the Bills vs Falcons game on Jan. 2, 2022 at Highmark Stadium.

Each Coach of the Week winner will receive an $1,000 grant from the Buffalo Bills and ADPRO Sports. The respective Coach of the Year winners will also receive an additional $1,000 for their programs.

Buffalo Region Coach of the Week #10

The result sets up WNY Maritime with a rematch of the sectional title game from the 2021 fall II season against Iroquois, as the Falcons stymied Iroquois with four plays inside the five and a goal line score of their own to earn the victory. With a win over Iroquois on Nov. 13, Maritime could claim its third consecutive Section VI championship.

After opening the season with back-to-back losses to Class A finalist Bennett and two-time defending Monsignor Martin champion Canisius, the Falcons have rattled off eight-straight wins.

Parker has worked with a wide range of youth in the Upstate New York Region, particularly in the WNY area providing a variety of developmental opportunities to the youth in the community. Many of which address specific needs necessary for the development of the student-athlete. That includes providing opportunities through his work with the Corey Graham Elite Sports Academy, with AAU travel basketball, track & field, a gang prevention program, entrepreneurship and mentoring programs as well.

Over the last three years, the Maritime football team has had an 100% graduation rate with an average GPA of 3.2 overall.

Parker and the Falcons staff has been adamant in protecting against the spread of COVID-19. That includes physical distancing while outdoors, ensuring players and coaches are wearing masks at all times and that football equipment is cleaned and sanitized each day.

As mentioned before with his work at Corey Graham Elite Sports Academy, Parker is the director of the academy, which offers youth football with the CG Elite Eagles.

Tyree is the son of Bernadine Caesar and Gregory Parker. He has two children of his own; his daughters, Tyresha and Nevaeh.

Rochester Region Coach of the Week #10

University Prep’s Isiah Young is the Week 10 Buffalo Bills and ADPRO Sports Rochester Region Coach of the Week after his Griffins took a 40-8 victory over Brighton in the final matchup of the Class A1 bracket of the Section V playoffs.

Here in this fall 2021 season, the Griffins have their highest overall team GPA all-time in program history, including several players touting 4.0 GPAs. Young has been able to set this mark by instituting an athletic study hall two times a week after practices.

Young has been able to develop a strong level of health & safety within U-Prep’s program with the implementation of a year-round strength & conditioning program.

Young and the Griffins staff has maintained a great relationship with the Flower City Panthers youth organization, as well as other youth coaches and programs in the Greater Rochester Region.

Young has a fiancé, Kayli Westervelt, and one daughter, Gemma Marie Young. The Griffins’ head man also serves on staff with his brother and defensive coordinator, Damian Young.

A New Era: The Women behind the Men