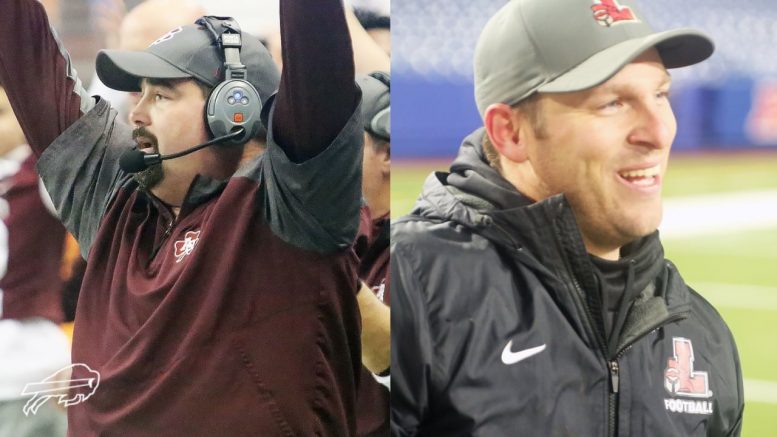 Even though there won’t be any high school football in New York until 2021, the Buffalo Bills will be honoring high school football coaches over the next week as part of their annual High School Coach of the Week program. The Bills and ADPRO Sports are partnering to recognize some of the best coaches in Western New York.

The Bills will be recognizing outstanding work that their community’s varsity football coaches are doing with their programs both on and off the field. Each week, the Bills will recognize a coach from the Buffalo and Rochester regions.

Below are descriptions of both coaches from BuffaloBills.com.

Derek Annechino from the Aquinas Institute has been named the Week 1 Buffalo Bills and ADPRO Sports Coach of the Week for the Rochester Region.

Derek actively works year-round to improve the Aquinas football program. During the offseason, the team regularly participates in 7 v 7 competitions, strength and conditioning programs, and camps. Coach Annechino also helps players navigate the recruitment process and consistently checks in with them to make sure that their studies are completed and their grades are strong. He also runs study halls year-round for his student-athletes to help with the rigorous coursework at Aquinas.

Coach Annechino is actively involved with Youth Football in the Rochester area, taking charge of clinics for youth coaches and hosting a youth summer camp for local players. Derek is also a Camp Good Days volunteer and is currently participating in a food drive to help Rochester-area families in need of a Thanksgiving meal.

At the start of the school year, Coach Annechino was instrumental in helping Aquinas prepare for returning to school and athletics while serving on the school’s Covid Task Force. He helped develop a plan for the football program, following all health and safety guidelines in a strict fashion.

Eric Rupp from Lancaster High School has been named the Week 1 Buffalo Bills and ADPRO Sports Coach of the Week for the Buffalo Region.

Rupp has coached the Legends for four seasons and won the Section 6 Class AA title all four seasons with a career record of 39-7. In addition, his team was named the Sportsmanship Team of the Year by the WNY Certified Officials Association in 2019. Rupp is a multiple-time winner of the Coach of the Year award throughout his career from organizations like WNY High Sports, Bee area newspapers, Cross Training Athletics and the WNY Football Alliance.

Off the field, Rupp and his team are actively involved in giving back to the community. The Legends team has volunteered at the Buffalo Ronald McDonald House, improving the facility’s landscaping each year.

Rupp leads his players as they provide Christmas gifts and food for needy families during the Holiday season. The Legends also participate in the WNY Back to School Backpack Program, providing school supplies to kids from low-income families. Coach Rupp has also spoken to members of the Kids Escaping Drugs Program.

Coach Rupp also has one of the Legends’ home varsity games designated as Youth Football Night. The players and cheerleaders are introduced by team and run out onto the game field before kickoff.

Each winning Coach of the Week will receive a $700 Grant from the Buffalo Bills and a $1,000 merchandise credit to ADPRO Sports.

During the Bills’ January 3, 2021 game against the Miami Dolphins, team officials will announce the team’s Coach of the Year winners.

See what the Bills are doing in their community