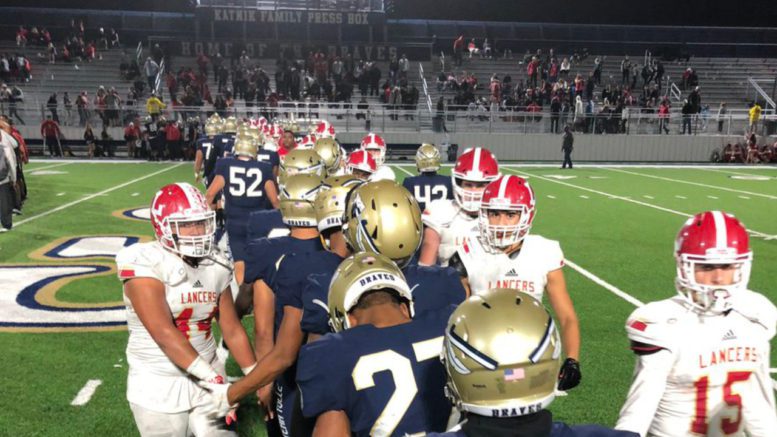 After a close first half, No. 4 St. John Bosco pulled away from No. 27 Orange Lutheran to win its Trinity League showdown between nationally-ranked teams 63-28 in Bellflower, California Friday night. The Braves’ victory set-up next week’s showdown with top-ranked Mater Dei, which was the unanimous national champ last year.

After OLu tied the game up at 21-all late in the first half, Tyus Poyer took a short kick and returned it for a score with just two seconds left in the half to give SJB a 28-21 lead at the half.

It was Bosco’s second kickoff return of the half. However, the Braves weren’t finished on special teams as Kris Hutson started the second half with a kickoff return for a touchdown. It was Hutson’s second TD return on the night.

THIS IS NOT A DRILL@boscofootball‘s special teams unit gets the hat trick with its THIRD kick return of the night @krishutson_1 | #FOXPrepZone pic.twitter.com/qXWCp19oOO

Junior quarterback DJ Uiagalelei was 23-of-28 for 261 yards with three touchdowns.

Orange Lutheran falls to 4-3 overall, but it should be noted that the Lancers losses have come at the hands of No. 4 St. John Bosco, No. 13 Corona Centennial and No. 16 Mission Viejo.