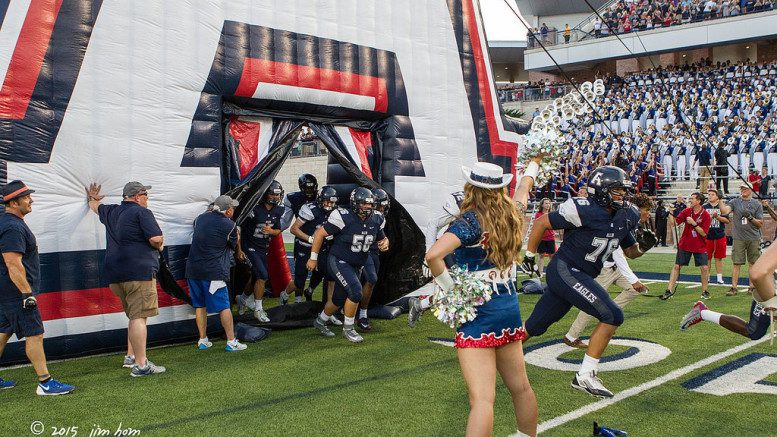 As we head into the home stretch of the season, the Allen Eagles control their own destiny in their bid to win a fourth straight High School Football America “mythical” national championship.  The three-time Texas state champs bring a 57-game win streak into Friday night’s Class 6A Division I state semifinal against Westlake, ranked #26 in the High School Football America Top 50.

The game will be played in Waco tonight after officials moved the game up from Saturday because of the threat of severe weather.

If the Eagles can claim a fourth straight Texas championship, there’s a good chance that once again, they’ll be our national champs, based on our proprietary algorithm, which we believe is the most accurate computer ranking out there.

It’s hard to dispute how good the Allen (14-0) program has become under head coach Tom Westerberg, who has led the school to four overall state titles with an incredible record of 148-16.

While many expected a drop-off after the Eagles lost 2014 High School Football America Player of the Year Kyler Murray to graduation, Westerberg has been able to keep the wins coming with a very strong defense and using a two-quarterback system.

Westlake (13-1) is a formidable opponent for Allen, which owns third longest active win streak in the nation and the second longest for an 11-man program.

The Chaparrals are led by head coach Todd Dodge, who brings a lot of championship coaching experience into the contest.  Dodge led Southlake Carroll to four Texas state titles in a span of seven years.  Three of those titles came between 2004 and 2006, which matched Abilene‘s state record for consecutive state football titles.  Allen can break that record with a fourth straight title this season.

When Dodge was at SC, his teams beat Allen in the four games they played between 2003 and 2006 with each win coming in the postseason.

Offensively, Dodge has another good quarterback leading his team.  Junior and Texas recruit Sam Ehlinger has accounted for 4,506 yards of total offense this year with 67 touchdowns.

Defensively, only two teams — Lake Travis and Atascocita — have scored more than 20 points against the Westlake defense this season.

Westlake’s only loss this season was back on October 23rd to Lake Travis, currently ranked #25 in the High School Football America National Top 25.

The winner of the Allen/Westlake game will face the winner of Saturday’s Judson (13-1) versus North Shore (11-3) game for the Division I championship.