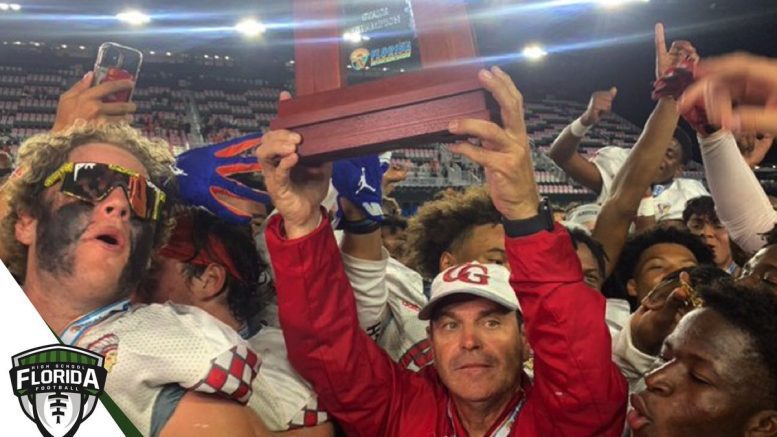 In a battle of nationally-ranked teams, Cardinal Gibbons edged Cocoa 21-19 Thursday night for the Florida Class 4A state championship. The title is the second straight for CG and the school’s third in four years. For Cocoa, it was the Tigers third straight loss in a state championship game.

Cardinal Gibbons never trailed in this one after taking a 7-0 lead on its opening drive.

Cocoa tied the game up on its first drive, but that was all of the scoring until the fourth quarter.

OJ Ross for Cocoa is in from 3 yards out. The dude has 37 rushing touchdowns so far this season! #flhsfb pic.twitter.com/HhhUs7kjZ3

One of the biggest plays of the night came when Cocoa closed within one point at 14-13 and decided to go for two and the lead.

Kamari Moulton’s second touchdown run turned-over to be the game-winner. Moulton finished with 28 carries for 173 yards.

Kamari Moulton with his second TD of the night as Gibbons responds after the turnover on downs by Cocoa. Gibbons looking to go for 2 here. #flhsfb pic.twitter.com/oEQ3awbr8L

Cocoa closed the gap to 21-19 on a Davin Wynder touchdown pass. Once again, the Tigers attempted a two-point conversion and once again the Chiefs’ defense was equal to the task.

And the 2 point conversion for Cocoa is NO GOOD! #flhsfb pic.twitter.com/prBrx25Bti

Read a complete recap from our friends at FloridaHSFootball.com