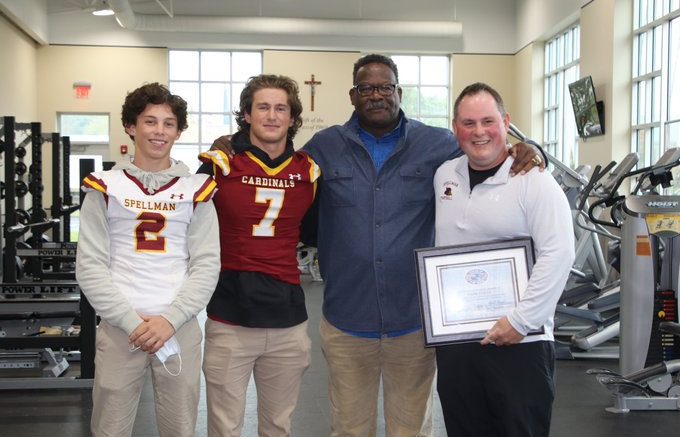 Coach Chace, currently in his first year as head coach of the Cardinal Spellman football team, sought out revenge on Friday night after falling to the Spartans, 42-8, in the teams’ first meeting on September 10. The gritty Cardinal Spellman team got their vengeance with a double-overtime win as they handed St. Mary’s, the top seed in the Division 6 power rankings, their first loss of the fall 2021 season.

Cardinal Spellman was led by junior captain and quarterback Jack Duffy, who recorded three rushing touchdowns on the day. Duffy came up clutch with 2:30 left in the fourth quarter as he broke free for a 50-yard rushing touchdown to tie the game at 14 and force overtime. A loud and passionate fan section helped fuel the Cardinals on Friday evening to snap Catholic Central League leader St. Mary’s six-game winning streak.

“The resilience and dedication Coach Chace has already shown in just his first year as head coach is outstanding,” said Tippett. “Guiding the Cardinals to a program-changing win over unbeaten St. Mary’s last Friday, Coach Chace is more than deserving of this week’s Patriots Coach of the Week honor, and it might not be his last.”

The Cardinals will look to build off Friday’s monumental victory as they close out the regular season at Arlington Catholic on Friday, October 29 at 6:30 p.m. EST.

Patriots, College, and Pro Football Hall of Fame linebacker Andre Tippett, now the team’s Executive Director of Community Affairs, met with the Cardinal Spellman captains and coaching staff Tuesday morning to present the football program with a $1,000 donation on behalf of the Patriots Foundation in honor of Coach Chace. The visit and check presentation will be featured on the Patriots weekly television show, “Patriots All Access,” which airs on Friday night at 7 p.m. on WBZ-TV in Boston and will be available immediately after on Patriots.com.