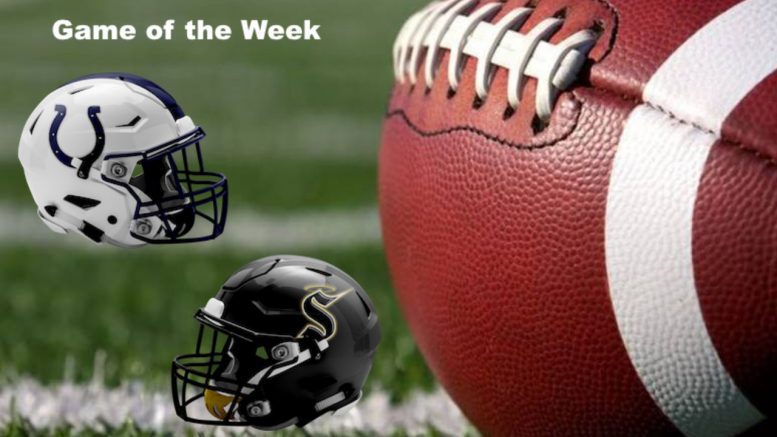 The following story is from our friends at EasternPAFootball.com‘s Bruce Badgley, who is runs the Small Player Big Play app.

For the second week in a row Berks Catholic woke up Tuesday  morning without a game Friday night. But when Friday afternoon came, the Saints were once again on buses heading off to face an opponent who lost its game due to COVID related problems. Last night 5A Cedar Cliff hosted 4A Berks Catholic in what turned out to be a back and forth, slugfest thriller. Cedar Cliff stopped Berks Catholic on a two point attempt in the 2nd Overtime and came away with a 35-34 victory Friday Night.

Cedar Cliff Quarterback Gannon McMeans was solid all night.  McMeans had three TD passes including the game winner in Double Overtime. Running Back Justin Small led BC with two TD’s.

Cedar Cliff Head Coach Collin Gillen told his team before the game, “ You’re guaranteed one week, this is it.”  Gillen also commented about  this football season, “Who knows, we were able to fill with these guys this week. Next week we might be the shutdown team.”

Things got started fast in this one. Berks Catholic took the opening kick and sped down the field to take the lead.

Cedar Cliff answered right back as Jontae Morris took it to the house on the ensuing kick to tie it at seven.

Cedar Cliff forced a BC punt on the Cedar Cliffs first offensive play when McMeans hit Trenten Smith on a 55 yard TD. It was 14-7.

After a wild start to the game, the Defenses rose up in quarter two.  We went to the half with Cedar Cliff up 14-7.

Midway through quarter three, BC finally began to move the ball. QB Brad Hoffman hit Trace Brown. We were tied at 14. (see highlight)

As we went to quarter four, Cedar Cliff took a 21-14 lead on a pass from McMeans to KC Robinson.

The rest of quarter four was dominated by the defense, so we went to OT!  In the first OT Justin Small scored for BC. Gannon McMeans dove across for Cedar Cliff in to the second overtime and tied at 28.

McMeans threw to Ramon Garcia. The extra point made it 35-28.  BC Quarterback Brad Hoffman made an incredible play at the pilon to score a TD.  Berks Catholic’s Coach Rick Keeley went for two and the win.  Justin Small was stopped inches short of the goal line and Cedar Cliff had the win 35-34.  Just an incredible effort by both squads last night.(see highlight)