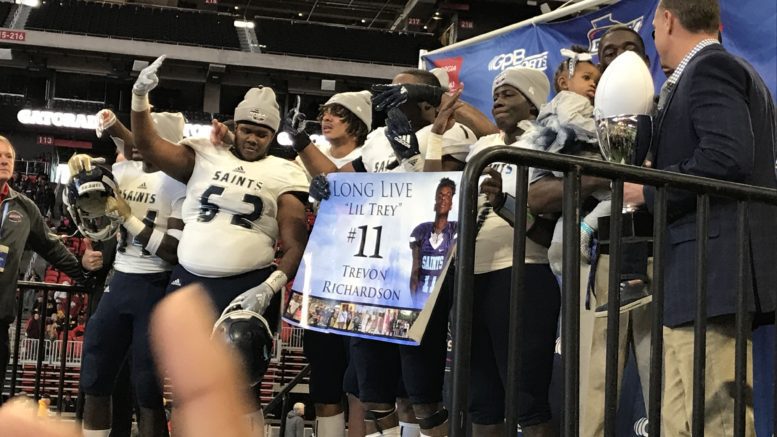 Cedar Grove, ranked No. 44 in the High School Football America 100 national rankings, is Georgia’s Class 3A champ after winning a heart-stopping 14-13 victory over a stubborn Peach County team Tuesday at Mercedes Benz Stadium.

The Saints trailed the Trojans 13-7 when the nation’s No. 1 wide receiver recruit Jadon Haselwood caught a 22-yard touchdown pass from Kendall Boney will only four seconds left.

The win was an emotional one for Haselwood and his teammates who dedicated the season to former teammate Trevon Richardson, who was killed earlier this year, just a few days after graduating.

Haselwood, who still hasn’t announced his school decision yet, surprised his teammates by wearing Richardson’s No. 11, instead of his customary No. 2.

#Top100 No. 44 Cedar Grove wins state championship on .@jadon_haselwood TD catch with 4 secs. to go in the game. Afterwards, he talked about the catch & wearing No. 11 in honor of his former teammate Trevon Richardson who was murdered earlier this year. .@cghssgasaints pic.twitter.com/8pzEoDEkCS