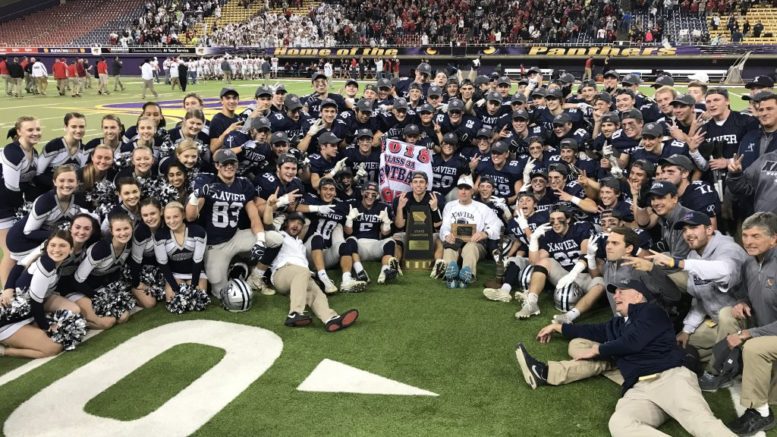 Xavier, Cedar Rapids had steamrolled the Bobcats in a district matchup in October, like it had most of its opponents in 2018, but the road to a repeat wasn’t going to be easy on Thursday night at the UNI-Dome.

The Saints (13-0) withstood an excellent gameplan and effort from Western Dubuque for four quarters, and still held on to the title with a 34-20 win.

“We had guys step up and I’m just incredibly proud of this team and how we responded to all of the challenges tonight,” Xavier senior quarterback Quinn Schulte told media members after the win.

Schulte was Xavier’s workhorse on Thursday, taking control of the offense and contributing on defense. He finished with 27 carries for 221 yards and two touchdowns rushing, 7-of-10 passing for 199 yards and two more scores, and 6.5 tackles in a game that required stops because of how well the Bobcats (10-3) were moving the ball early on.

Western Dubuque was shutout, 35-0, in the District 4 game. In the Class 3A championship, they scored impressively on their first two series and even led at halftime, 20-17. The unbeaten defending champions would have to fight to repeat, especially after giving up a season-high in points before going to intermission.

“Western Dubuque came out tough,” Schulte said. “They were a totally different team from the first time we played them. They were physical, they studied our schemes. It was tough.”

Both teams sustained key injuries in Thursday’s showdown as well: Xavier entered the game having lost offensive line standout Josh Volk in the semifinals, but then lost senior running back Braden Stovie after halftime, and Western Dubuque quarterback Calvin Harris went out near the end of the third quarter and did not return.

Harris rushed for 70 yards and a touchdown, and threw for 137 yards and another touchdown. His top targets were Drake George (five catches, 106 yards) and Jake Hosch (two catches, 75 yards), and while backup Sam Goodman rallied drives in the fourth quarter, he could do little to slow down the Xavier onslaught.

Xavier scored 17 points after halftime, including the go-ahead touchdown on a Patrick Chambers reception to cap a 15-play, 91-yard drive. Schulte, son of head coach Duane Schulte, punched in a score with 30 seconds remaining to close out the victory, but Western Dubuque made the three-time champions work for the win to the final whistle.

“The tears are not because we lost,” Western Dubuque head coach Justin Penner said, “the tears are because it’s over.”

Western Dubuque was playing in its first title game since winning 3A in 2001. Xavier added to its crowns from 2006 and 2017 with the win. The Saints finished with 504 yards of offense and controlled the ball for more than 15 minutes after halftime.