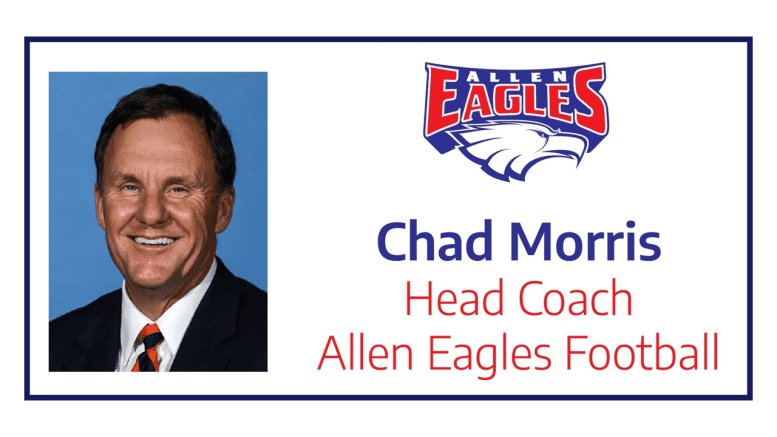 “I am so thankful to Allen ISD for the chance to work with an amazing group of student-athletes and a dedicated coaching staff,” said Morris in a news release from the Allen Independent School District. “Allen is a top-notch school system that prioritizes students above all else. I want to thank Superintendent Dr. Robin Bullock, the Board of Trustees, Administration, and Athletic Director Kim Garner for their unwavering support over the past year.”

The news release states that Morris resigned to pursue a college football opportunity.

“The chance to serve as a head coach in Allen is a premier opportunity throughout the state of Texas,” said Kim Garner, who is part of Allen’s Athletics Department “Coach Morris did an outstanding job of leading the Allen football team this past year and pouring his heart and soul into our student-athletes and program. Now, our attention turns to finding a coach who will continue to build upon our winning tradition, instill a positive family culture, and inspire our young athletes to find success on the field and in the classroom.”

Morris took over at Allen after serving as a college football head coach at Arkansas and SMU. Morris began his coaching career at the high school level, leading Lake Travis to back-to-back state titles in 2008 and 2009. Prior to that, Morris won a state title as the head coach at Bay City.

This past season, Allen finished 11-3, ranked No. 59 in the High School Football America 100 national rankings, powered by NFL Play Football. The Eagles advanced to the Class 6A Division I quarterfinals.

“I want to thank Coach Morris for the passion he brought to the Allen Eagles football program,” said Dr. Robin Bullock. “Coach Morris has an amazing ability to connect with student-athletes on a personal level, and I wish him all the best in his return to college football.”