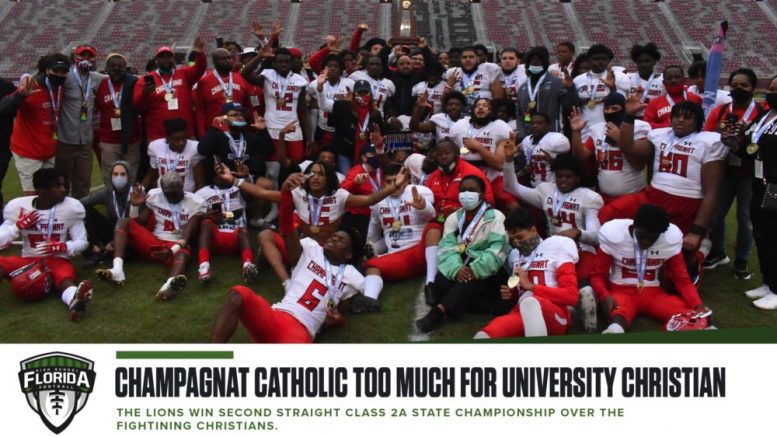 Below is a game recap of the Champagnat Catholic/University Christian 2A championship game from our friends at FloridaHSFootball.com.

The Champagnat Lions are your FHSAA 2A State Champions, topping University Christian 41-27.

This game basically came down to two things: lots of scoring and lots of fumbles.

Champagnat came in the more talented team. In fact, the Lions are sending four players off to college with full-ride scholarships. But, University Christian really did hold its own, despite the final score.

However, the Christians fought back hard. University Christian led Champagnat at the end of the first half, 15-14, thanks to a 2-point conversion.

But, the Champagnat Lions were not to be forgotten. They came out swinging after the half with the same ferociousness they began the game with. Two more touchdowns on two more drives put them back up.

Usually, once the better team gets going, the other team falters — that was absolutely not the case here. Once again, the Christians found the endzone to get back in the game.

Suddenly, the score is 26-21. Then, the trajectory starts to shift once Lions focus on three-star Georgia Tech signee, WR Malik Rutherford.

First, Champagnat gets to a 34-21 lead on this bomb to Rutherford.

Next, the Lions’ defense locks in and pushes the Christians back, back, and back again. However, University Christian’s Orel Grey managed a final score for his school.

But, Rutherford called the ballgame on this OBJ-Esque catch.

In conclusion, this game was exciting, and University Christian looked impressive. However, talent wins games.

Players of the Game

University Christian quarterback Desirrio Riles went 11-of-17 for 178 yards and a touchdown. Next up for the Christians, running back Joe Carter rushed for 89 yards and added 22 receiving yards. However, Orel Gray stole the show at feature back: 126 rushing yards and two touchdowns, plus 50 receiving yards. Additionally, Ja’won Grey added a 66-yard touchdown pass, plus eight more receiving yards.